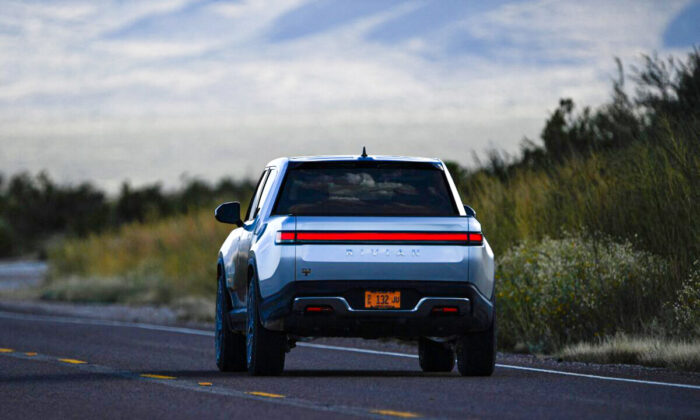 A Rivian R1T electric truck drives down a highway near the entrance to Blue Origin's Launch Site One outside of Van Horn, Texas, on Oct. 12, 2021. (Patrick T. Fallon/AFP via Getty Images)
Companies

Global initial public offerings had the best year on record in 2021, especially those in the United States, with an abundance of liquidity and favorable monetary policies that have resulted in high company valuations and a special purpose acquisition (SPAC) boom.

About 2,850 businesses and SPAC companies have raised more than $600 billion in IPOs according to data compiled by Bloomberg, smashing the record of $420 billion set back in 2007 before the financial crisis.

U.S. IPOs, including popular names like Robinhood Markets Inc. (HOOD), Roblox Corp. (RBLX), and GlobalFoundries (GFS), have raised nearly $276 billion so far this year, according to data from Dealogic. This includes SPAC deals as well.

The first name on the list is Rivian Automotive Inc. (RIVN), the electric truck startup, which was valued at over $100 billion when it launched on Nasdaq, after raising nearly $12 billion in the world’s biggest IPO of 2021.

China Telecom Corp. was Asia’s biggest IPO with $8.4 billion and Polish company InPost SA took the top spot in Europe with a $3.2 billion valuation in Amsterdam.

A South American online lending behemoth, Brazil-based Nubank, is going to sell shares to investors in the coming weeks with a valuation expected at over $50 billion.

Post-pandemic recovery fueled by pent-up market demand, cash savings during the lockdowns, and stimulus payments along with favorable central bank policies have left the companies flush with cash.

“We are moving from a perfect market for IPOs with plenty of liquidity and deals performing well to a more normal environment,” where investors are more selective, Gareth McCartney, global co-head of equity capital markets at UBS Group AG, told Bloomberg.

These above-normal performances have also stocked up fears of a bubble, similar to the dot-com craze that reached its peak in 2000 and melted away almost all gains two years later in 2002. The S&P 500 Index is currently trading at more than 21 times projected earnings in the next year, well above its 10-year average.

“As monetary stimulus programs are scaled back, and if global growth slows sharply, markets could be heading for a correction,” said Susannah Streeter, senior analyst at Hargreaves Lansdown Plc., to Bloomberg. “Over-valued companies will feel the pain much faster than others.”

As for blank cheque SPACs, they reached an all-time high of $159 billion in 2021, but have caught the attention of regulators who are scrutinizing accounting practices and bringing on tougher oversight.