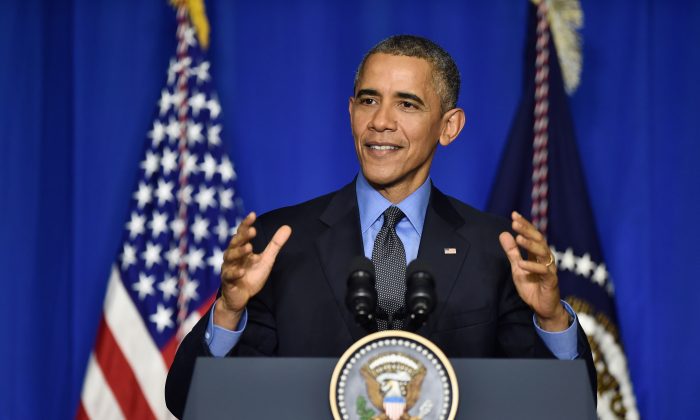 President Barack Obama at a press conference at the OECD Conference Centre before leaving the U.N. Conference on Climate (COP21) in Paris, France, on Dec. 1, 2015. (Pascal Le Segretain/Getty Images)
International

More than 150 heads of state, including President Barack Obama, attended the opening of the summit. Its benchmark for success: to reach an international deal to limit emissions and hold the global temperature rise to 2 degrees Celsius.

“I’ve come here personally, as the leader of the world’s largest economy and the second-largest emitter, to say that the United States of America not only recognizes our role in creating this problem; we embrace our responsibility to do something about it,” Obama told conferees Monday.

Without such a limit on greenhouse gas emissions, some scientists claim, catastrophic worldwide consequences will occur by the end of the century because of man’s effect on the environment.

Others question the value of the temperature target and the overall utility of the summit (dubbed  COP21), which is expected to bring more than 40,000 delegates and 3,000 journalists to a city still reeling from the most deadly attacks since World War II.

Policy makers tend to assume the 2-degree target expresses a solid scientific view, but it doesn’t.
— The Wall Street Journal

As the climate conference begins, throughout the streets of Paris, the scene is reminiscent of a world’s fair. Displays of alternative energy technology such as solar panels and wind turbines line the Champs-Elysées. Exhibitions of energy-efficient housing are set up in front of the Paris city hall.

At Place Saint-Michel in the Latin Quarter, a man in ski clothes stands on top of a block of papier-mâché crafted to look like melting ice. Around his neck he wears a sign in French that says: “We must act before it’s too late.”

A City on Edge

Despite the dire warnings of some climate change scientists and activists concerning what is at stake at the conference, a long list of contemporary security concerns threatens to overshadow the two weeks of negotiations.

At the top of the list are the symbiotic threats of Islamic terrorism and fighters returning from the battlefields of Syria and Iraq. On the eve of the COP21 conference, and less than one hour after arriving in France, Obama paid his respects outside the Bataclan nightclub, where 89 died during the Nov. 13 terrorist attacks that killed 130 and wounded hundreds across Paris.

French police ordered onlookers peering out their windows to get back inside and hurried people on the street away from the area, highlighting the high state of alert.

“Considering the heightened threat of terrorism in our country, everything is being done to secure to the maximum the conference and its environment,” French Interior Minister Bernard Cazeneuve told reporters Saturday.

France has mobilized 120,000 security personnel in the run-up to the climate conference. The event, which ends Dec. 11, is being held at a conference center in a Paris suburb called Le Bourget—where Charles Lindbergh landed after his historic solo flight across the Atlantic in 1927.

“We will have zero tolerance for violent activists who wish to harm the public order,” Cazeneuve said.

Apart from the terrorism threat, another behind-the-scenes diplomatic drama is playing out at the climate conference, and it threatens to steal the spotlight—Russia’s involvement in the wars in Syria and Ukraine.

Tensions between Russia and Turkey have increased sharply. Russia canceled visa-free travel for Turkish citizens in Russia and all but outlawed Russians—who account for 12 percent of all tourists to Turkey—from visiting that country. On Saturday, Putin signed off on a bevy of economic sanctions against Ankara.

Russia’s retaliations against Turkey were to “assure national security and that of Russian citizens,” Putin said Saturday.

While the Russia-Turkey row dominated headlines, the conflict in eastern Ukraine has escalated quietly as well, shattering an uneasy truce and once again edging the embattled region closer to all-out war.

World leaders are here to participate in the first two days of talks before delegates take over, and Ukrainian President Petro Poroshenko is among them. That puts him within arm’s reach of his Russian counterpart.

Despite the Kremlin’s denials, Russian troops and weapons have streamed into Ukraine since spring 2014, spurring U.S. and European economic sanctions against Russia.

Ukraine recently banned all commercial flights to Russia and launched an international campaign to remember the Holodomor—Stalin’s deliberately imposed famine in the 1930s that killed millions in Ukraine. Reflecting a tit-for-tat economic and public relations battlefront, Russia on Friday, Nov. 28, cut off all coal deliveries to Ukraine.

Further complicating matters, Ukrainian partisans recently sabotaged power lines running from Ukraine to Crimea, plunging parts of the peninsula, which Russia seized from Ukraine in March 2014, into a blackout.

The terrorist attacks in Paris set off contentious debates in the United States and Europe about what to do with a wave of refugees from the Syrian civil war. Two of the terrorists entered Europe through the Balkans under the guise of refugees, officials said, raising concerns about foreign fighters infiltrating through refugee pipelines.

Echoing the rhetoric from Republican presidential contenders in the United States, many in Europe clamor for tightening border controls and limiting the number of refugees the continent takes in from Syria.

“Europe must say that it can’t take so many migrants, it’s not possible,” French Prime Minister Manuel Valls told the German newspaper Süddeutsche Zeitung on Nov. 25.

Valls added: “Controlling the borders of the European Union is essential for its future. If we don’t do it, the people will say Europe is finished!”

Controlling the borders of the European Union is essential for its future. If we don’t do it, the people will say Europe is finished!
— Manuel Valls, prime minister, France

The EU’s concern with refugees surpasses rhetoric. On Sunday, 190 miles northeast of Paris in the Belgian capital of Brussels, the EU struck a deal with Turkey to limit the number of refugees transiting into Europe. As part of the deal, the EU pledged 3 billion euros to assist Turkey with tightening border controls.

Despite the terrorist threat and the tumultuous milieu of world affairs, organizers said, the COP21 climate conference will go on. Speaking on the French television channel TF1 the day after the Nov. 13 attacks, Valls said the conference “will be held because it’s an essential meeting for humanity.”

Yet the media circus surrounding the conference—and pivoting the focus from stopping terrorism to reducing greenhouse emissions—left some in the French capital uneasy.

“We’re not ready,” says a young woman working at a book shop off Rue de Rivoli near the Louvre. “We haven’t even finished grieving.”