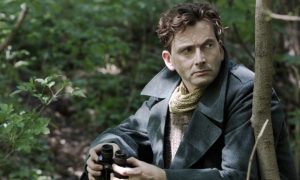 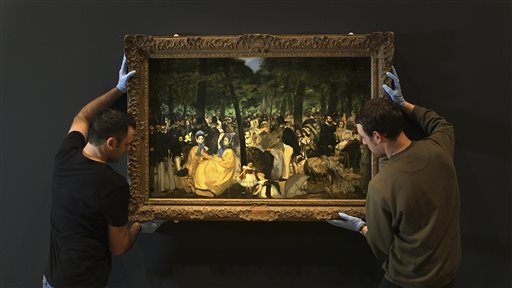 Employees of the Royal Academy of Art move a Manet painting at the Royal Academy of Arts in London. On April 11, BY Experience is launching EXHIBITION, broadcasts of current or just closed art exhibitions from around the world to select movie theaters and performing arts centers in nearly 30 countries. (AP Photo/Phil Grabsky Films)
Arts & Culture

NEW YORK—Museum exhibits from around the world will be shown in more than 1,000 theaters worldwide under a new experience being trumpeted as one of the largest art projects ever.

“This is undoubtedly the biggest project of our times connecting major art exhibitions with the widest possible audience via the wonders of the big screen,” says EXHIBITION On Screen’s website. “This is an exclusive and global first that will delight art-lovers worldwide.”

EXHIBITION begins on April 11 with a retrospective devoted to the portraits by Edouard Manet from the Royal Academy of Arts in London, which will be screened to 450 theaters across the United States and 600 others worldwide.

Two other exhibits scheduled are a feature of the works of Edvard Munch (1863-1944) who is best known for the painting The Scream; and an exhibition of Johannes Vermeer (1632-1675), a Dutch painter who specialized in portraits of people engaged in everyday life, and painter of the Girl with a Pearl Earring.

“This is a way for an armchair traveler to come to the arts world, have it brought to them,” said Julie Borchard-Young, co-owner of BY Experience, the company distributing the broadcasts. “Because it’s not live, we wanted to make sure that the programs are very immersive and contemplative, that the viewer has a chance to slow down his or her busy life and really take this in.”

Patrick Corcoran, director of media and research at the National Association of Theatre Owners, said the new program would likely do well.

“People do love art exhibitions, and not all of them travel,” he said. “This is a real opportunity to bring something to those customers.”

The worldwide reach of the program means exhibits will show in countries across the globe—included on the project’s website are more than two dozen countries—including Argentina, Australia, Costa Rica, Denmark, France, New Zealand, and Poland.