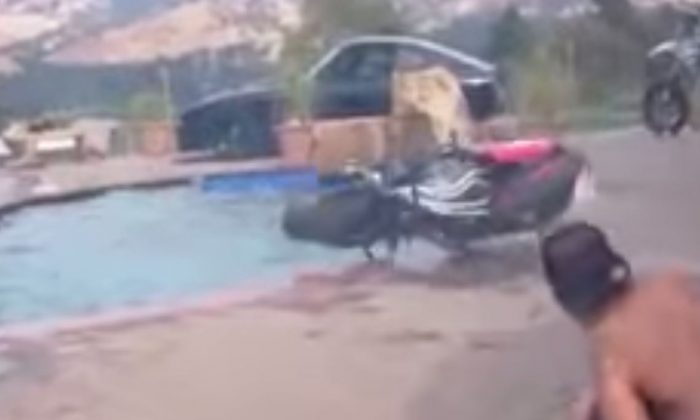 A video that’s going viral on WorldStarHipHop.com shows a guy who messed up a wheelie on his motorcyle.

The bike slips and it rides into the pool.

A number of people are then seen trying to fish it out.

The same person then rides a smaller bike into the pool.

WEST HOLLYWOOD, Calif. (AP) — Actor Robert Downey Jr. thanked authorities Monday for arresting his 20-year-old son on suspicion of cocaine possession and said the family was determined to get him the help he needs.

Indio Falconer Downey was taken into custody on Sunday afternoon after a car he was riding in was pulled over in West Hollywood, authorities said.

“Unfortunately, there’s a genetic component to addiction and Indio has likely inherited it,” Robert Downey, Jr., who had a series of high-profile drug-related arrests in the late 1990s, said in a statement. “We’re grateful to the Sheriff’s Department for their intervention, and believe Indio can be another recovery success story instead of a cautionary tale.”

Robert Downey’s drug use sent him to prison and rehab and cost him acting roles. He is now one of the industry’s most bankable stars after appearing in Marvel’s “Iron Man” trilogy and “The Avengers.”

Indio Downey was booked on suspicion of possession of a controlled substance, believed to be cocaine, and possession of drug paraphernalia, sheriff’s Sgt. Dave Valentine said.

Two other people were in the car, but only Downey was arrested.

He appeared in the 2005 movie “Kiss Kiss Bang Bang,” which starred his father.