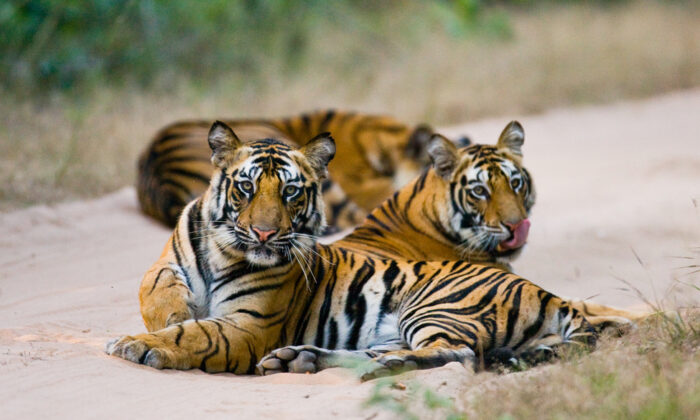 Tigers are seen on the road in Bandhavgarh National Park in Madhya Pradesh, India, in this file photo. (Gudkov Andrey/Shutterstock)
Environment

There are far more tigers in the world than previously thought, according to a new population assessment by the International Union for Conservation of Nature (IUCN).

The wild tiger population sits somewhere between 3,700 and 5,600, up 40 percent from the last tiger assessment in 2015, the IUCN said in a July 21 report. Improvements in monitoring led to the higher numbers, the report stated.

Although still endangered, the world tiger population is now stable or increasing, the report said. The IUCN credited habitat conservation programs for allowing the population to grow.

Major threats to tigers in the wild include poaching and habitat destruction and fragmentation due to development and agricultural expansion, the organization said.

The IUCN recommended expanding and connecting protected areas and ensuring that these regions are “effectively managed” as a way to save the tiger population. In addition, conservationists must work with communities living in and around tiger habitats to strengthen the protection of tigers, it said.

Dr. Jon Paul Rodríguez, chair of the IUCN species survival commission, stated in the report that the recovery in tiger numbers indicates that it’s possible to solve complex conservation challenges.

“Although tigers are still Endangered, their populations appear to be stable or increasing. We need to learn from these conservation successes, share them with the public, and increase our investment in evidence-based conservation action,” Rodriguez stated.

The majority of the world’s tiger population lives in India, which makes it a critical country in the effort to protect the animals. Official estimates show that India had 2,697 tigers as of 2020, up from 2,226 in 2014. Efforts to protect the nation’s tigers kicked off roughly 50 years ago.

However, Ullas Karanth, director of the Center for Wildlife Studies in Bangalore, India, believes much more can be done about increasing the number of tigers in the country.

Indian Prime Minister Narendra Modi is moving forward with the tiger conservation program, intending to grow the nation’s tiger population to 4,000 within a decade. Protecting just one tiger helps to conserve about 25,000 acres of forest, the World Wildlife Fund estimates.