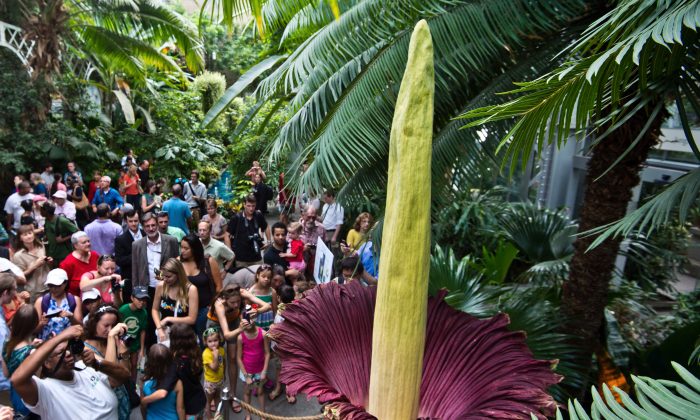 Tourists look at the blooming Titan Arum plant July 22, 2013 at the US Botanic Garden in Washington, DC. The titan arum (Amorphophallus titanum), also known as the corpse flower or stinky plant, is blooming and it may remain in bloom for 24 to 48 hours, and then it will collapse quickly. (PAUL J. RICHARDS/AFP/Getty Images)
Environment

Reaching heights of over 10 feet, Amorphophallus titanium, produces the world’s tallest unbranched flower. Commonly referred to as the corpse flower, or corpse plant, this plant is native to Indonesia, but due to its spectacular display, it has been cultivated in greenhouses all around the world for over 100 years.

Taking years to produce a single flower, and only able to be pollinated for a single day, the corpse flower relies on its tremendous stench, akin to rotting meat, to attract pollinators – in this case, carrion loving flies.

After the flower withers, a single leaf, the size of a small tree emerges from the underground tuber. A flowering in 1926 attracted so much public attention the police were dispatched to prevent chaos.