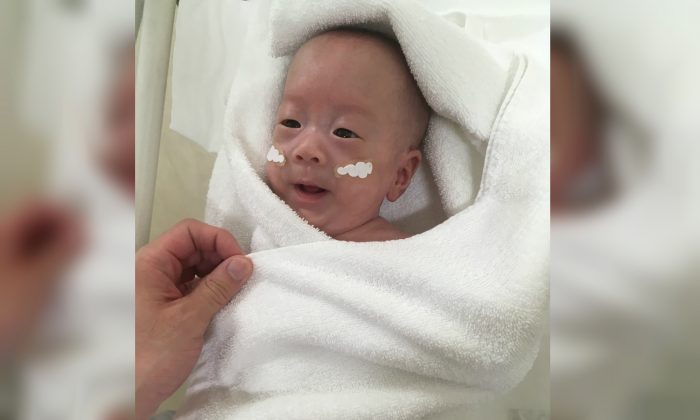 A baby boy weighing 268 grams (9.45 ounces) at birth in August 2018 in a handout image obtained on Feb. 27, 2019. (Keio University School of Medicine, Department of Pediatrics/Handout via Reuters)
Asia & Pacific

The survival rate of babies born weighing less than a kilogram (2.2 pounds) is about 90 percent in Japan, according to Keio University Hospital. For those born under 300 grams (10.59 ounces), that survival rate falls to around 50 percent.

Very small babies are more likely to survive if they are girls. The reason is not known, although one theory is that male babies lungs develop more slowly.

According to UNICEF, Japan has one of the lowest rates of infant mortality.

Another record—even older–is sometimes quoted too, of a boy born in the United States in August 1879. That baby, who was born to a 7-foot-11-inch Canadian giantess, however, died 11 hours later. He weighed 23 pounds 9 ounces and measured 76.2cm (30 inches).

Dr. Kristin Atkins, a specialist in maternal and fetal medicine at the University of Maryland School of Medicine explained to ScienceLive that like very small babies, large babies aren’t always healthier.

“The main nutrient that controls babies’ growth is sugar,” Atkins said. “Therefore, mothers with diabetes that have elevated blood sugars are more likely to have big babies,” she said.

The shoulders of babies over 10 pounds can also become trapped under the mother’s pelvic bones, potentially damaging the nerves in his neck, or breaking his collarbones or arms.

The record for the world’s heaviest healthy baby—22 pounds 8 ounces—has stood for an astonishing 63 years.

According to Guinness World Records, the boy was born in the city of Aversa, Italy, in September 1955.

The average weight for babies is around 7.5 pounds, although between 5.5 pounds and 10 pounds is considered normal, according to the University of Michigan.