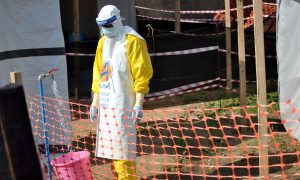 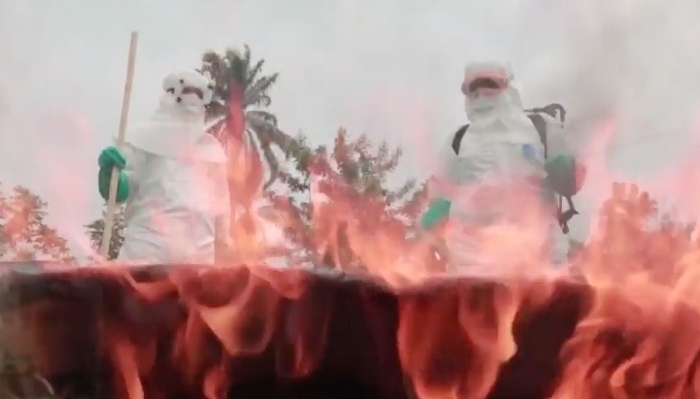 The deadly Ebola epidemic in the Democratic Republic of Congo (DRC) has now exceeded 1,000 cases and claimed the lives of more than 600, the country’s health ministry confirmed on Monday, March 25.

But the situation has been made worse with attacks on treatment centers by militant Islamists in the region who have been entrenched in Eastern Congo’s 25-year-long civil war.

“The total is now 1,009 new cases,” Congolese health officials said in a statement. “But the response, led by the Health Ministry in collaboration with its partners, has limited the geographical spread.”

It is the second worst outbreak in history, surpassed only by the 2014 Ebola outbreak in West Africa which killed more than 11,000 people, according to the U.N.’s World Health Organization (WHO).

More than 80% of people affected by #Ebola in #DRC accept safe and dignified burials for their loved ones who died of the disease – key to preventing onward transmission https://t.co/NPk02TEdKS pic.twitter.com/dVhEZa7zoj

“We use words like ‘cases’ and ‘containment’ to be scientific but behind every number is a person, a family and a community that is suffering,” Dr. Tedros Adhanom Ghebreyesus, WHO director-general said in a statement on Saturday. “This outbreak has gone on far too long.”

“We use words like ‘cases’ and ‘containment’ in the #Ebola response in #DRC to be scientific, but behind every number is a person, a family and a community that is suffering”- @DrTedros https://t.co/NPk02TEdKS pic.twitter.com/z57JOEq7o4

Ebola is a deadly and contagious virus that spreads to people from wild animals and is transmitted among people through direct contact, such as through bodily fluids or broken skin. Over half of Ebola cases are fatal. The disease causes fever along with diarrhoea, severe vomiting, bleeding, and rashes.

On average Ebola patient has a 50 percent survival rate, making it one of the deadliest known viruses in the world.

But advancements in the treatment of the Ebola virus, such as a trial vaccine, experimental treatments, and mobile units for treating patients have meant that health workers have been better prepared for the latest outbreak.

WHO continues working with the government of #DRC 🇨🇩 and #Ebola-affected communities to build resilient health systems https://t.co/NPk02TEdKS pic.twitter.com/CnsBD7NhxJ

The virus has been prevented from spreading into neighboring countries and there have been no reported Ebola cases outside of the DRC’s provinces Ituri and North Kivu, the U.N. health body confirmed on March 23.

WHO has more than 700 people in #DRC and is working hard with partners to listen to the #Ebola-affected communities and address their concerns and give them greater ownership of the response, particularly in the current outbreak hotspots of Katwa and Butembo 🇨🇩 pic.twitter.com/b2GdaShUs8

Only 10 percent of those eligible for the vaccination have refused treatment, the WHO said, and more than 80 percent of those who become fatally infected accept arrangements to be made for safe and dignified burials—a key to preventing the spread of the disease that remains contagious for several days after death.

The WHO cited “increased security challenges, including the recent direct attacks on treatment centers, and pockets of community mistrust” as causes for the recent reported weekly rate of confirmed Ebola cases, following several weeks of decline.

Ebola treatment facilities have been attacked in recent months by the radical Islamist group the Allied Democratic Forces (ADF), according to the International Institute for Strategic Studies. The group was founded in Uganda in 1989 to overthrow right-wing Ugandan President Yoweri Museveni and has been active in the region for decades.

Local residents told Deutsche Welle that there have been rumors circulating in the community that Ebola is being “deliberately spread” by the DRC’s central government or the DRC’s former left-wing President Joseph Kabila, who lost power in January after 18 years of rule, as a weapon of war.

Other rumors among the community that has a deep mistrust of the government and foreigners have claimed that the disease is being “spread” by the aid organizations working in the area. WHO’s Dr. Peter Salama told AP that there have been problems resulting from the makeshift “tradi-modern” health centers, which have been offering both traditional and modern treatment that have been linked to new cases of infection. Misdiagnosis and lack of proper hygiene have also been an issue, he said.

According to WHO, of the 51 reported Ebola cases among health workers working in the region, 17 have died.

An attack on a treatment center earlier this month saw a local police officer killed, according to CNN.

“As we mourn the lives lost, we must also recognize that thousands of people have been protected from this terrifying disease,” Dr. Matshidiso Moeti, WHO regional director for Africa, said in a statement.

“We are working in exceptionally challenging circumstances but thanks to support from donors and the efforts of the Ministry of Health, WHO and partners, we have saved thousands of lives.”

Ebola is endemic to the DRC. The first outbreak of the virus occured in 1976.