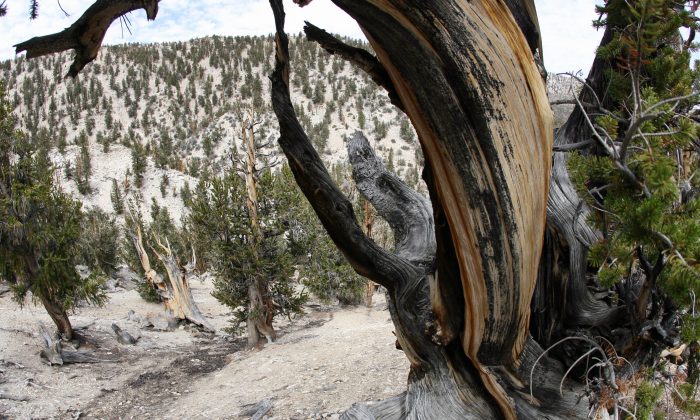 The ancient bristlecone pine trees in the White Mountains of the Inyo National Forest near Bishop, Calif. Among these trees are two pines 4,800 and more than 5,000 years old respectively. (Gabriel Bouys/AFP/Getty Images)
Environment

Many a tree has quietly, peacefully stood watching the changes of the Earth for thousands of years.

Some of them are giants, declaring clearly their great age. Some are dwarfed, gnarly, and twisted, like hobbled old men. Some don’t appear remarkable in any way, like legendary immortals magically maintaining their youth and blending in with their modern brethren.

Here’s a look as some of the oldest living things on Earth.

A Norway spruce in Sweden has a root system about 9,500 years old. It clones itself, meaning it grows a trunk that can live about 600 years, and when that one dies, it grows another. It’s longevity is similar to that of the phoenix of lore, reborn again and again yet essentially the same.

The ancient bristlecone pine trees in the White Mountains of the Inyo National Forest near Bishop, Calif. (Gabriel Bouys/AFP/Getty Images)

The mystique of the famous Methuselah tree is perpetuated not only by its almost 4,800 years of life, but also by the secrecy surrounding its location. The U.S. Forest Service keeps its location under wraps to protect it from vandalism and photos of the tree have also not been released. It is a bristlecone pine and it lives somewhere in California’s White Mountains along with many other ancient britstlecone pines.

It is named Methuselah for the oldest person in the Bible. To put its great age into perspective, the tree was about 1,350 years old when Egyptian Pharaoh Ramses II was born (around 1300 B.C.).

Bristlecone pines are able to survive so long, in part because of their dense and resinous wood, which is difficult for pests and fungi to penetrate.

Another bristlecone was discovered to be the oldest of its kind in 2012, at 5,062 years old (currently 5,064). The Forest Service has also kept the location of this tree a secret.

The Llangernyw yew tree in Llangernyw, Conwy, Wales. It is between 4,000 and 5,000 years old. (Stemonitis via Wikimedia Commons)

The Llangernyw Yew in Wales, UK, is estimated to be between 4,000 and 5,000 years old, according to the Urban Horticulture Institute at Cornell University. A couple of other yew trees in Europe are more than 2,000 years old. Some old chapels were housed in the hollowed out trunks of ancient yews and the oldest yews are often found in churchyards. In the Middle Ages, Europe’s yew population was heavily harvested as a favorite material for bow-making.

The secrets of the yew’s longevity include its ability to survive a split better than many other tree species; and its toxicity, which saves it from foraging animals.

The General Sherman is the largest tree, by volume, in the world. It is a sequoia tree in California’s Sequoia National Park. The volume of the tree’s trunk is just over 52,500 cubic feet. Dr. Andrew Douglass at the University of Arizona took a core sample of the tree and estimated it to be more than 3,500 years old.

“The Senator,” in Big Tree Park, Longwood, Fla. The photo was taken 36 hours before the ancient tree was destroyed by fire. (Jonclift via Wikimedia Commons)

A drug user in Florida burnt down the Senator, a tree estimated to be about 3,500 years old at the time. In 2012, Sara Barnes, lit the tree on fire and took photos with her cell phone. She later explained to authorities that she needed light to see the drugs she was using. Her defense attorney Michael Nappi told the Orlando Sentinel in January this year that Barnes had completed drug-treatment programs, continued to attend Alcoholics Anonymous and Narcotics Anonymous meetings, lives with her parents, and had essentially cleaned up her life.

A kauri tree in New Zealand is estimated to be more than 2,000 years old. It is known as Te Matua Ngahere, which means “Father of the Forest.” It is the second largest kauri tree in New Zealand. Imagine the awe and surprise Nicholas Yakas would have felt upon discovering this ancient tree in 1928 when he was working to build a highway in the area.

The Jomon Sugi tree is one of many sugi trees on Japan’s Yakushima Island to have stood for thousands of years. Estimates for Jomon Sugi’s age range from 2,000 to 7,200 years. Its irregular shape is said to have saved it from harvesting. A nearby stump shows a tree some 3,000 years old was not so lucky. According to locals, it was cut down to build a temple in the 16th century.

Jomon Sugi stands about 80 feet (25 meters) high, and has a circumference of about 50 feet (16 meters). Yakushima Island is now a UNESCO World Heritage Site.

Pando is a colony of quaking aspen sharing a massive root system and considered to be a single living organism. It may have first taken root anywhere from 10,000 to 1 million years ago.