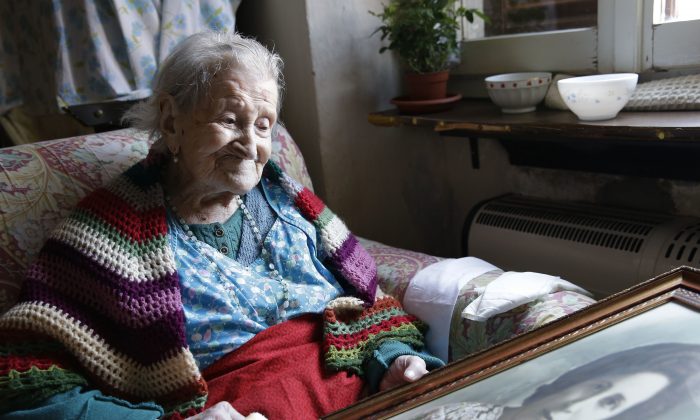 FILE - In this Friday, June 26, 2015 photo, Emma Morano, 116, sits in her apartment in Verbania, Italy. At 116 years of age, Emma is now the oldest person in the world and is believed to be the last surviving person in the world who was born in the 1800s, coming into the world on Nov. 29, 1899. Thats just 4 and a half months after Susannah Mushatt Jones, who died Thursday in New York at the age of 116. (AP Photo/Antonio Calanni, File)
Europe

The last person who was born in the 19th century, an Italian woman who is 116 years old, revealed a “secret” to her longevity.

Her secret is eating two raw eggs and 100 grams, or about 3.5 ounces, of raw steak per day, according to the New York Times.

When she was a teenager (back in the 1910s), her doctor suggested that she eat the meal for her anemia, and the habit stuck for the next century.

On Friday, journalists descended onto her home in Morano, Verbania. “I am doing fine—116!” she said.

“I finished school and I went to work. I used to sing. I had a beautiful voice,” she said.

Her physician, Dr. Carlo Bava, said that she was officially the world’s oldest person.

One of her carers told the Telegraph she was happy to hear that she is the world’s oldest person.

“She was told this morning and she said ‘My word, I’m as old as the hills,’ but she was very pleased,” said Rosi Santoni.

“She was very, very happy” and sitting up in a chair, he said. “She was all proud and contented.”

Morano also claimed that being single for a long time helped her live longer. She split from her husband in 1938 and never remarried, although, Morano said she has had many “suitors.”

“I didn’t want to be dominated by anyone,” Morano said, per Time magazine.