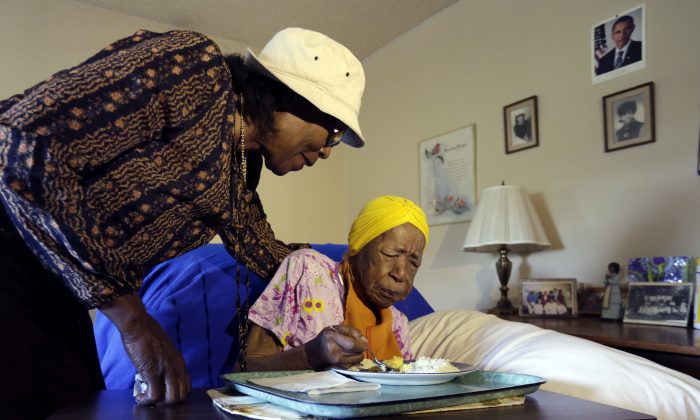 FILE - In this Monday, June 22, 2015 photo, Lois Judge, left, helps her aunt Susannah Mushatt Jones, during breakfast in Jones' room at the Vandalia Avenue Houses, in the Brooklyn borough of New York. Jones, the worlds oldest person, has died in New York at age 116. Robert Young, a senior consultant for the Gerontology Research Group, says Jones died at a senior home in Brooklyn Thursday night, May 12, 2016. He said she had been ill for the past 10 days. (AP Photo/Richard Drew, File)
New York

Reports note that she had been ill for the 10 days prior to her death.

Robert Young, a senior consultant of the Gerontology Research Group (GRG) spoke with the Associated Press, saying she was “the very last American from the 1800s.”

Born on July 6, 1899, on a rural farm near Montgomery, Alabama, Jones was the third of 11 children and the oldest female. Her grandparents were slaves, her parents, Mary and Callie Mushatt, were sharecroppers.

In 1922, Jones graduated from Calhoun Colored School in Calhoun, Alabama. Jones was accepted to attend Alabama’s Tuskegee University, but her parents couldn’t afford the tuition.

She moved to New York in 1923. There, in addition to working as a live-in nanny, Jones helped organized a group of her fellow high school graduates—called the “Calhoun Club“—to help provide impoverished black children with financial aid for their college educations.

Susannah Mushatt Jones, world’s oldest person, has died at 116. Our story on her from 2015: https://t.co/2LGVIoGez1 pic.twitter.com/vsZBi4PVCz

Only briefly married in 1928, Jones never had any children of her own, but she adored them. She was known by loved ones as “Miss Susie” and by her over 100 nieces and nephews as “T,” short for “Aunty.”

Although she retired in 1965, Jones remained active. And despite losing her sight at the age of 100 to glaucoma, she served as a member of her housing complex’s tenant patrol until the age of 106. She voted for Barack Obama, twice.

The supercentenarian was blind and was hard of hearing, yet she was doing well right before her death; she was not bed-bound and only took two medications a day. Jones regularly clocked 10 hours of sleep per night.

Reasons for her longevity? In a 2005 press release from the New York City Housing Authority, Jones attributed her long life to her lifestyle: “I never drink or smoke. I surround myself with love and positive energy,” she said. “That’s the key to long life and happiness.”

Yet, even for Jones, life was full of little luxuries. In 2014, she told Time magazine that every morning for breakfast, she ate four strips of bacon with scrambled eggs and grits.

“Sometimes, she’ll take the last strip, fold it in a napkin, put it in her pocket and save it for later,” said her niece Selbra Mushatt.

Related Coverage
Maggie, the World’s Oldest Dog, Passes Away at 30

Another vice of Jones’ was high-end lingerie. Selbra recounted one incident at a doctor’s office: “One time, when she had to get an EKG, the doctors and nurses were surprised to see her wearing that lingerie, and she said, ‘Oh sure, you can never get too old to wear fancy stuff.'”

The GRG works with the Guinness World Records’ officials to maintain the database of the Earth’s oldest humans.

According to Young, the unofficial oldest person is now Emma Morano-Martinuzzi, of Verbania, Italy who was born on November 29, 1899.