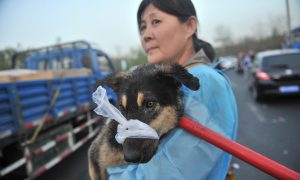 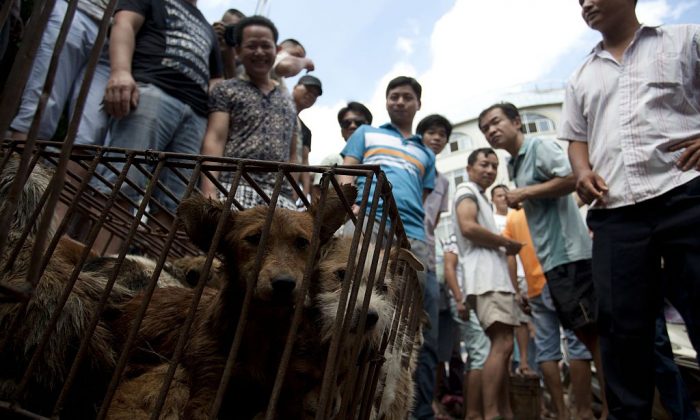 Vendors wait for customers to buy dogs in cages at a market in Yulin, in southern China's Guangxi province on June 21, 2015. (STR/AFP/Getty Images)
Social Issues

This year, the World Dog Show, described as “the world’s most important dog show”, is scheduled to be held in Shanghai from 30 April to 3 May. Hosted by the Fédération Cynologique Internationale (FCI), the largest worldwide dog organization, the competition sees 10,000 dogs enter every year.

Until recently, 10,000 was also the number of dogs butchered every year for China’s annual Yulin Festival, an event held during the summer solstice at which festival-goers eat dog meat.

The Yulin festival will be held a month after the gathering of dog lovers.

The Kennel Club, the oldest recognized kennel club in the world, as well as other international kennel clubs, are boycotting the 2019 show in China.

The World Dog Show is held in a different country each year, but the decision of the FCI General Assembly to hold the event in China has met with strong criticism globally despite being made in accordance with its rules.

The Finnish Kennel Club states that granting Shanghai a chance to host the competition would have required far more thorough scrutiny than the process that was undertaken.

The Yulin Festival in China’s southern Guangxi province was started by dog meat traders in 2009 in an attempt to boost business, and has since been the subject of much controversy, drawing particularly strong protest from Western communities.

Cat meat, fresh lychees, and liquor are also sold at the festival.

Local residents and vendors claim that the dogs are killed humanely. The ten days of festivities have seen over 10,000 dogs paraded on the streets, stuffed in small wooden crates and metal cages.

Photos and videos have captured dogs being beaten to death with metal sticks, skinned, and boiled alive. Many of these dogs suffer from diseases. Dogs and other animals used in some Chinese cuisines are tortured under the superstitious guise that the animal’s fear and suffering raises adrenaline levels, which improves the taste of the meat.

At the festival, dogs are set on fire while still alive, torn apart, smashed with hammers, and cut with chainsaws.

As a part of the public torture, some dogs are run over with cars.

Many dogs do not survive the grueling journey to Yulin, dying due to dehydration or starvation in the back of the truck. Others suffer from severe injuries and cannot stand in the dirty pens which they are transferred into to await slaughter, some still suffering from the side-effects of poisoned bait used to catch them. There, they watch other animals being beaten to death and thrown in de-hairing machines, before meeting their own gruesome end.

In China, around 10 to 20 million dogs, including puppies, are killed for their meat every year. Some people believe that consuming dogs during summer months brings luck and good health, and that the meat can ward off heat, diseases, and heighten men’s sexual performance.

Some of the dogs eaten are stolen household pets, with their collars still on.

There are no nationwide animal protection laws in China.

Facing intense pressure from animal rights groups and social media, the Yulin city officials withdrew support for the festival in 2015. It still went ahead, although fewer dogs were slaughtered as a result.

According to an editorial published by Chinese state-run media the Global Times, Western obsession over the treatment of dogs is hypocritical and “non-noteworthy”. The writer cited bullfighting as an example of animal abuse to which the West turns a blind eye.

He labels the controversy a Western campaign against China and likens it to the 1988 Olympic Games held in South Korea, when Western criticism of dog meat consumption “forced” South Korea to abandon their customs, with dog meat disappearing from big cities overnight.

One popular comment from a Chinese netizen reads: “Actually, there are very few Chinese people who eat dog meat, but [we] should be tolerant of those who do consume dog meat! I never eat dog meat, but I understand the Yulin Dog Meat Festival. Why can we eat pig, cow and chicken, but not dog?”

Though the majority of comments took up a similar patriotic stance, one Chinese netizen wrote: “The relationship and feelings between dogs and people have always been intimate.

“People who eat dogs are a minority in China. Personally I like both cats and dogs, but I am not in a position to keep one as a pet.

“However, I strongly oppose and hate the evil ill-treatment of cats, dogs, and other animals. This isn’t something done by a normal human.”

This year, the Yulin Dog Meat Festival will run from June 21 to 30.

The FCI released a statement in 2015 explaining that “FCI sees it as an excellent opportunity to raise awareness among the Chinese population that the dog, our beloved friend, is a member of our families, a living entity and most of all, Man’s best Friend [sic].”

With pet ownership rising in China over the past decade, Chinese animal rights activists have stepped up their condemnation of the festival, staging rescue missions and protests. Similarly, Chinese celebrities have taken to social media to protest animal cruelty.

It is estimated that numbers of animals killed in the Yulin Festival are now down to less than 3,000.

Whether or not the FCI’s hopes come to fruition, the reputation of the World Dog Show has no doubt suffered a blow.

An online petition to the FCI has already gathered over 700,000 supporters.