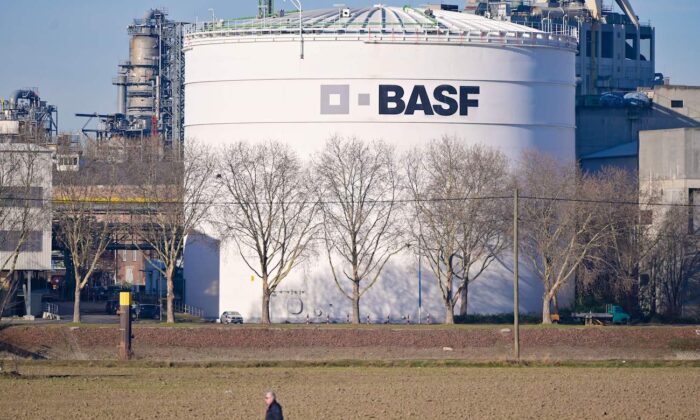 A man walks past tanks of German chemicals giant BASF at the company's headquarters in Ludwigshafen, western Germany, on Feb. 26, 2019. (Uwe Anspach/DPA/AFP via Getty Images)
Companies

“We are reducing production at facilities that require large volumes of natural gas, such as ammonia plants,” BASF CEO Martin Brudermueller said in a July 27 media call after the release of the company’s second-quarter results.

In September 2021, BASF cut ammonia production at its headquarters in Ludwigshafen, Germany, as well as at its large chemical complex in Antwerp, Belgium.

To fill gaps in supply, BASF will purchase some ammonia from external suppliers, Brudermueller said.

Ammonia is a key ingredient in fertilizer production. It also plays a key role in the manufacturing of plastics and diesel exhaust fluid. Its production also yields high-purity carbon dioxide as a byproduct, which is needed by the meat and fizzy drinks industries.

Chemical companies are the biggest industrial natural gas users in Germany and ammonia is the single most gas-intensive product within that industry. The production of ammonia usually accounts for about 4.5 percent of the natural gas used by German industries.

Germany’s largest ammonia maker, SKW Piesteritz, and No. 4, Ineos, have separately stated that they can’t rule out production cuts amid disruption to Russian gas supplies.

Unlike many European countries, Germany has no liquefied natural gas port terminals to replace Russian pipeline gas. That means companies are under pressure to reduce gas-intensive activities if gas deliveries are cut further.

Russian gas producer Gazprom began reducing on July 27 its gas supply to Europe via the Nord Stream 1 pipeline, the major delivery route to Europe for Russian gas. Supplies were cut to a mere fifth, or 20 percent, of the pipeline’s total capacity. The drop comes after the pipeline restarted on July 21, following a scheduled 10-day maintenance outage.

In an effort to boost the region’s energy security, the European Union announced on July 26 a “voluntary reduction” of natural gas demand by 15 percent for the winter.

Brudermueller said that come 2023, farmers would see high fertilizer costs and fertilizer availability might be worse.

“The main application for ammonia is for fertilizers, and that’s for producing food. For this year, that’s not going to be a problem because all the farmers have already bought their fertilizers and have already used it on their field. The harvest is already taking place,” he said. “Next availability will be worse because the capacity is not going to be there and the next is price. Fertilizer prices are skyrocketing.

“And then farmers will be forced to save money and will only use the minimum of fertilizers on their field. Might also mean that harvest is going to be minor. If there are weather problems, [it would result in] a shortage situation for important crops.”

He also noted that poorer countries at the end of the food supply chain would face significant challenges.