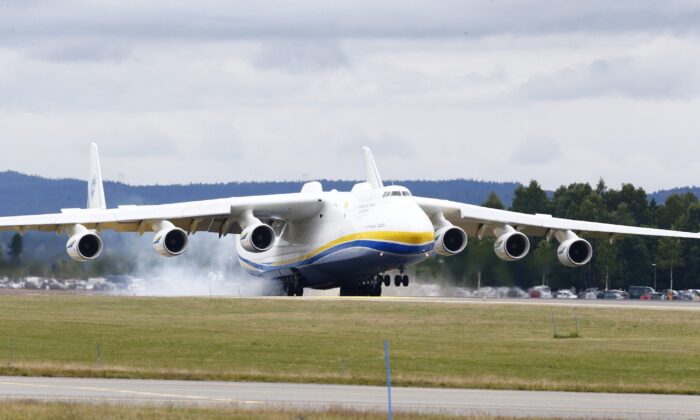 An Antonov AN-225 is pictured while landing at the Oslo Airport, on June 19, 2014, as it carries Norwegian military material from Afghanistan. (Heiko Junge/AFP via Getty Images)
By Bill Pan

The Ukrainian government said Sunday that “the world’s largest aircraft” has been destroyed at a strategically important airport outside Kyiv amid a Russian attack.

“This was the world’s largest aircraft, AN-225 ‘Mriya’ (‘Dream’ in Ukrainian),” Ukraine’s’ Minister of Foreign Affairs Dmytro Kuleba wrote on Twitter alongside a photo of the plane. “Russia may have destroyed our ‘Mriya. But they will never be able to destroy our dream of a strong, free and democratic European state. We shall prevail!”

This was the world’s largest aircraft, AN-225 ‘Mriya’ (‘Dream’ in Ukrainian). Russia may have destroyed our ‘Mriya’. But they will never be able to destroy our dream of a strong, free and democratic European state. We shall prevail! pic.twitter.com/TdnBFlj3N8

Celebrated as an engineering marvel, the Antonov An-225 is the only one of its kind. The enormous plane is equipped with three jet engines on each wing, supporting a maximum take-off weight of 600 metric tons, or 1.3 million pounds. By comparison, Lockheed Martin’s C-5M Super Galaxy, the largest cargo plane in service for the U.S. Air Force, has a maximum take-off weight of 840,000 pounds.

Rumors that the Mriya was damaged or destroyed began to emerge on Feb. 24, when a battle broke out over the control of the Ukrainian skies, as part of Russia’s full-scale military offensive against the Eastern European country in the name of a “special operation.” Shortly after bombing the Kyiv-Boryspil International Airport, the Russians extended the air battle to Hostomel-Antonov Airport, where Mriya was sheltered.

In the following days, conflicting claims about the fate of the Mriya proliferated on social media. Numerous reports claimed that the six-engine plane was destroyed in a hangar fire as the result of the fighting, while Dmytro Antonov, chief pilot at the airline company that runs Hostomel, said on Facebook that the Mriya remained “whole” even after its home airport fell under Russian control.

Hostomel, which serves primarily as a commercial cargo center, is located just 15 miles northwest from Kyiv. It has a long runway capable of landing of heavy-lift transport planes, which means Russia could use it to quickly move troops and supplies to Kyiv’s outskirts.

Russian helicopters and airborne forces attacked and seized Hostomel in the early morning of Feb. 24, only to face a fierce counter-attack by the local troops later in the day.

“The enemy paratroopers in Hostomel have been blocked, and troops have received an order to destroy them,” Ukrainian President Volodymyr Zelensky said in a video address, reported Agence France-Presse.

Meanwhile, Oleksiy Arestovych, an adviser to Zelensky, declared on Facebook that “Hostomel Airport is ours,” and that “Russian paratroopers have been destroyed.” The Epoch Times could not confirm the exact status of the airport.