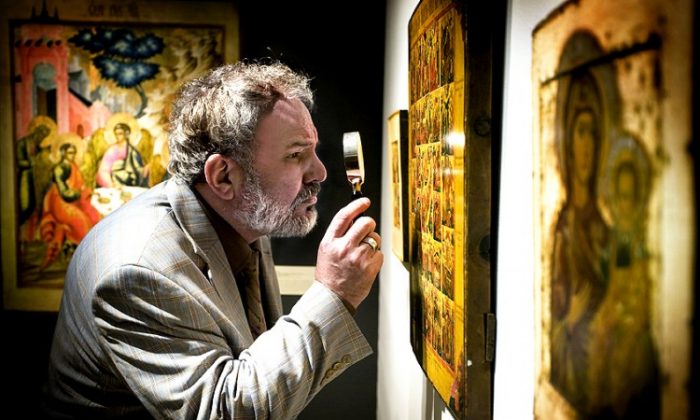 With objects dating as far back as 7,000 years, 260 of the world’s most prestigious arts and antiques dealers, and over 175 experts to do the vetting, the European Fine Art Fair (TEFAF) in Maastricht, Netherlands, is widely regarded as the pinnacle of fine art markets.

“TEFAF is a success because of one thing: not the location, not the buzz and who attends, nor the educational tours, and the sponsorship parties,” says New York-based art investor Jim Hedges, as quoted from the book in a TEFAF press release. “It is a success because the finest quality galleries show the best material of any fair in the world.”

The fair is so well vetted that visitors are virtually surrounded by museum-quality works.

The book tells the story of a picture dealer who displayed his catalogues on an antique table that didn’t meet TEFAF’s quality standards: “The furniture vetters duly turned up, pronounced it not up to standard and had it removed and stowed away in a locked storage room.

“The exhibitor was not pleased by their decision and pointed out that he was not trying to sell the table but the vetters stood their ground and said that it was an antique on show at the fair.” The resolution came with a simple tablecloth.

There’s also the opportunity for accidental discoveries. The book gives the example of individual collector Dora Janssen, who stumbled upon a vendor she didn’t know and made a relatively modest purchase of a medieval illuminated miniature in the 1990s.

But that chance encounter led to a major one the following year when she bought a 15th century work from the same dealer. She described the piece as “one of the grandest books of hours in existence.”

Since it first came into existence in 1988, TEFAF has become a cultural institution, transforming the Netherlands city of Maastricht into a fine art center.

“TEFAF is the most important event to take place in the city during the year,” said Maastricht Mayor Onno Hoes, according to the 25th anniversary book: “At first sight Maastricht is an unlikely venue to hold the world’s most important art and antiques fair, but there is a strong bond between the fair and the city; the two entities have grown up together.”

In appreciation of the city’s role in a successful fair, TEFAF announced last year that it made a “substantial financial donation” to the city’s Museum aan het Vrijthof.

The fair has also created a Museum Restoration Fund that donates up to $65,000 each year to one or two museum projects dedicated to restoring works of art.

This year’s highlights at TEFAF Maastricht include a 3,000-year-old Egyptian figure known as a “shabti”—an object placed in a tomb with the dead body of a significant Egyptian. The piece is being offered by Galerie Harmakhis of Belgium.

Altomani & Sons from Italy is offering a 1596 bronze statue by Mannerist sculptor Giambologna (Jean de Boulogne) titled “An Angel Alighting.” The religious work is part of a set of six such statues by Giambologna and is the last that is available in the market.

Kunstkammer Georg Laue of Munich will offer a rare cup made from a coconut once owned by German naturalist and explorer Alexander von Humboldt.

TEFAF will also feature an exhibition of master drawings by the likes of Leonardo da Vinci, Guercino, Rembrandt van Rijn, and Peter Paul Rubens. The drawings are on loan from the Fondation Custodia in Paris.