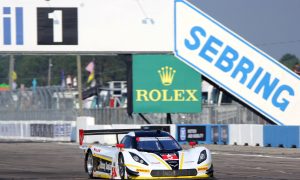 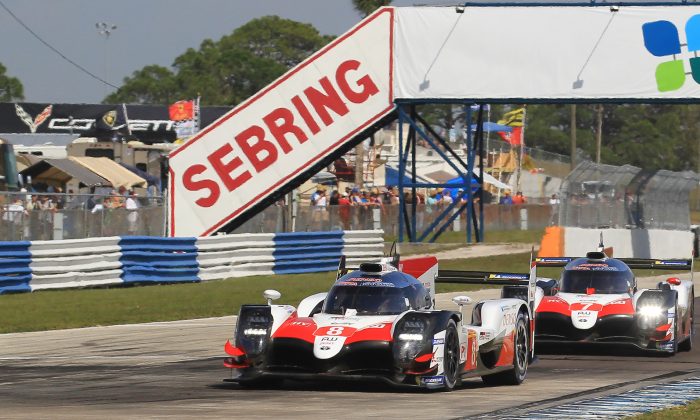 Nothing could match the speed of the Toyota TS050 Hybrids, which finished 1–2 in the WEC 1,000 Miles of Sebring on March 15 in Sebring, Florida. (Chris Jasurek./Epoch Times)
Motorsports

The World Endurance Championship visited Sebring International Raceway for a 1,000-mile event on March 15, offering North American sports car fans the spectacle of its 1000-bhp hybrids supported by a full field of cars in four classes.

The sports car world is divided into North America and the rest of the world. Different commercial considerations demand different approaches, which is why most of the world watches the cars of the World Endurance Championship race in Europe, the Middle East, and Asia, while in North America, fans follow the International Motorsports Association’s WeatherTech SportsCar Championship—all under the auspices of the global Fédération Internationale de l’Automobile, or FIA.

The FIA brought its European series to Sebring in 2011, as the Intercontinental Le Mans Cup series and again in 2012, in the series’ first year as the WEC. In both cases both series, the U.S. and European, ran together, creating some very crowded racing.

This time the organizers of both series realized their rules were too different to combine both series. The only answer was to hold separate events on successive days. And so, fans were treated to the 20 Hours of Sebring.

Due to differing regulations, the WEC cars are faster. The top-tier WEC cars cost a lot more than the IMSA cars. That money buys about 100 or more horsepower for the quickest conventionally powered cars and an extra 400 horsepower for the all-wheel-drive gas-electric hybrids.

In terms of mile per hour and lap times, the quickest WEC cars, the Le Mans Prototype Hybrids (LMP1-H) lapped Sebring’s bumpy 3.74-mile course five seconds quicker per lap than the fastest IMSA cars. Two-time World Drivers Champion Fernando Alonso got around the 17 corners in 1:40.124 at an average speed of 134.46 mph in the #8 Toyota TS050 Hybrid. The speediest IMSA car, the #6 Acura Daytona Prototype International (DPI) piloted by two-time IMSA champion Dane Cameron, completed a circuit in 1:45.865 at 125.837 mph average.

That’s the difference 400 horsepower can make.

The FIA World Endurance Championship 1000 Miles of Sebring started at 4 p.m. on Friday, March 15, and ended under yellow eight hours later, after providing race fans with 7:45 of high-speed action.

The pace seemed a little languid for the first four hours, as teams seemed to be testing the waters—how would their cars react to changing track conditions, and Sebring’s extreme bumps, during extended runs at race pace?

The intensity seemed to increase about halfway through, and stayed high until rain slowed the action with about 30 minutes left on the clock.

Light rain started falling on parts of the track with about half an hour left in the race. Thee, 22 minutes from the end, the skies opened up and dropped a deluge, causing everyone to scramble to change to full wet tires. Ten minutes later, Loic Duval lost control of the #28 TDS LMP2 Oreca and slammed head-on into the barrier at Turn 12. Cleanup lasted nine minutes, and the race ended under caution.

Prior to that, the Toyota hybrids, arguably the most advanced race cars on the planet, opened an insurmountable lead over the competition and unsurprisingly finished 1–2.

The two Toyotas ran as a team until Hour Five, when Lopez had an unfortunate coming-together with an errant Aston Martin, costing the car four minutes in the pits.

The #11 SMP BR1 lost time with a puncture in the first hour, while the #17 BR1 hit the wall hard exiting T1 in the race’s second hour, sidelining the car.

SMP’s chief rivals, the two Rebellions, both suffered mechanical woes. The #1 Rebellion struggled with gear-selector problems throughout the race, finally crashing hard and retiring in Hour Five when the shifter failed entirely. The #3 Rebellion suffered late-race mechanical issues which dropped it to 7th.

Porsche won GTE-Pro with pit work and fuel strategy. Everyone had to pit for rain tires in the final 20 minutes, but the class-leading #81 Team MTEK BMW M8.also needed fuel. The Porsche crew got the tires swapped and sent the car on its way while the BMW was still tethered to the fuel hose. The #91 Porsche came in second, but exited the pits first in class. Shortly after the Porsche took the lead, the yellow flag ended BMWs chances to retake the lead.

The #67 Ganassi UK Ford GT, which had led the class for most of the race, finished third in class.

The #77 Porsche, driven by Christian Ried, Julien Andlauer, and Matt Campbell, started from the class pole and finished 13 seconds ahead of its nearest rival, the #54 Spirit of Race Ferrari.

The #37 DC Racing Oreca driven by Will Stevens, Jordan King and David Heinemeier Hansson finished fourth overall and first in LMP2, 14 laps off the lead.

From Florida, the WEC moves on to Belgium for the Six Hours of Spa-Francorchamps—another race frequently affected by rain. Practice for the Spa Six Hours starts on May 2, while the race goes green on May 4.