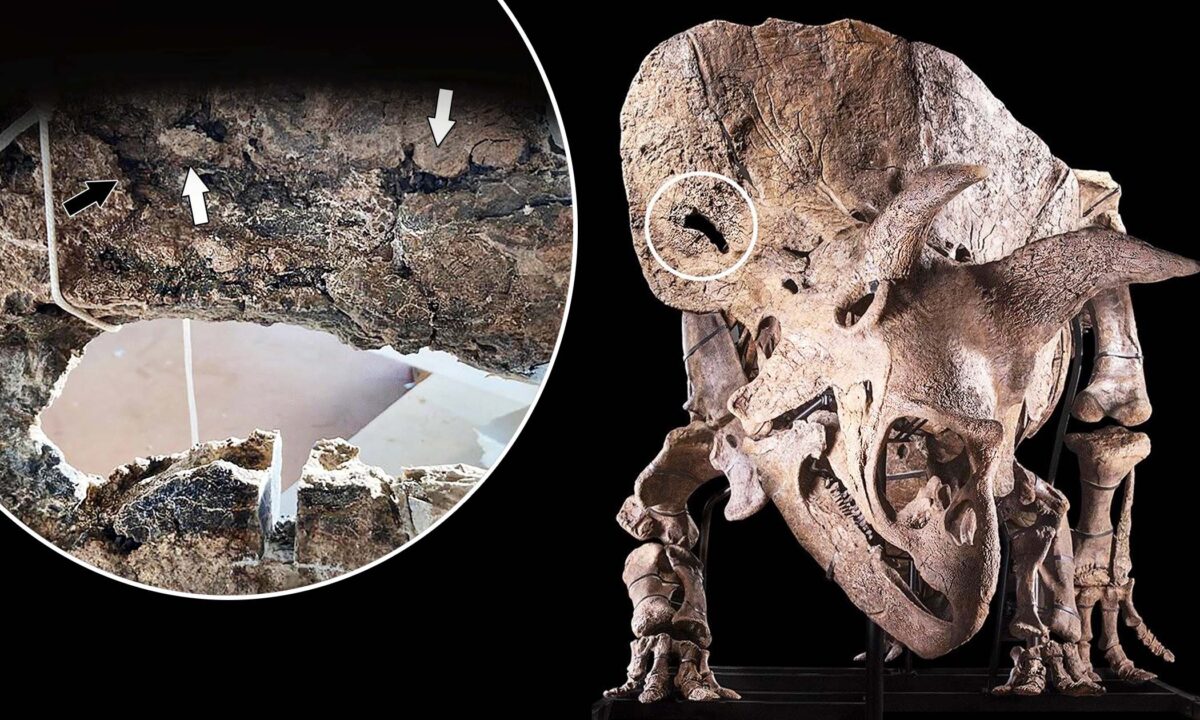 (Courtesy of Ferrara A., and Briano I. via Ruggero D’Anastasio et al)
Discovery

The world’s biggest triceratops had a “combat wound” in its skull inflicted by the three-foot-long horns of a rival, new research reveals.

The dinosaur—nicknamed “Big John”—is believed to have suffered the injury during a fight over territory or a mate.

The giant beast survived the scrap, and the injuries had almost cleared up at the time of its death—six months later.

“The mechanisms underlying the healing process in dinosaurs appears to be similar to that in mammals,” said study author Dr. Ruggero D’Anastasio, of the University of Chieti-Pescara, Italy.

Big John died 66 million years ago and was buried in an ancient floodplain that eventually ended up beneath a private ranch 70 miles from Rapid City, South Dakota.

The triceratops sat undisturbed until a fossil hunter stumbled upon its horns sticking out of a hill. Last year, it was sold to a private collector for over $7 million.

Its mounted skeleton measures 23 feet, 5 inches, from snout to tail tip—almost twice the length of a white rhino. It stands 8 feet, 10 inches, tall at the hips.

The huge skull—complete with a trio of 3-foot horns and neck frill—is 6 feet, 6 inches, wide and more than 5 feet long.

The beast’s signature neck adornment served as protection from other triceratopses and T-rexes—which may also have attacked it.

Now, state of the art scanners have identified an opening, or fenestra, in a bone on the right side of the creature’s skull.

“The wound is keyhole-shaped. The surface around the fenestra is irregular and features plaque-like deposits of bone,” D’Anastasio said. “They could have resulted from inflammation—possibly from infection.”

An analysis of samples taken from inside reveals the surrounding tissue is porous with lots of blood vessels compared to bones further away.

“This was newly formed bone. The bone also showed signs of remodeling, as demonstrated by the presence of little pits,” D’Anastasio said. “These features indicate the fenestra was caused by a traumatic injury but the bone was healing at the time of Big John’s death.

“It was caused by the horn of another triceratops, and occurred at least six months before.”

Triceratops is among the most recognizable of dinosaurs thanks to its horns and neck frill. The study in Scientific Reports backs the theory they were used as arms and armor.

It was effectively a reptilian knight that carried three lances and a shield on its enormous head.

“In the collective imagination derived from scientific and popular literature, triceratops often faced each other in combat,” D’Anastasio added. “Analyses confirm the fenestra of Big John is the result of a traumatic event, which might indeed have occurred during combat with another triceratops.”