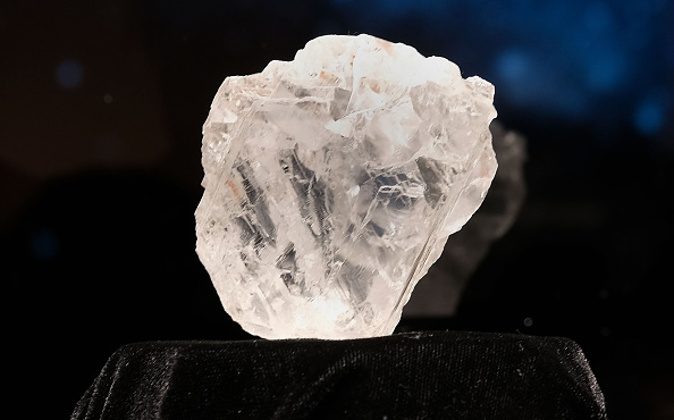 NEW YORK, NY - MAY 04: The 1109-carat rough Lesedi La Rona diamond, the biggest rough diamond discovered in more than a century, sits in a display case at Sotheby's on May 4, 2016 in New York City. Lesedi La Rona will be offered at auction in London on June 29 and be on display at Sotheby's New York. The diamond could sell for $70 million or more. (Photo by Spencer Platt/Getty Images)
UK

World’s 2nd Largest Diamond for Sale at Sotheby’s, Could Sell for Over $70M

A diamond dubbed “the diamond of a lifetime” is set to be auctioned at Sotheby’s auction house on June 29; it is expected to receive bids of $70 million or more.

Boasting 1,109 carats and tennis ball size, the diamond named Lesedi La Rona is the second largest diamond ever found and the largest found in over a century.

“The Lesedi la Rona is simply outstanding, and its discovery is the find of a lifetime. It is a huge honour for Sotheby’s to have been entrusted with its sale,” said David Bennett, chairman of Sotheby’s Jewellery Division. “Every aspect of this auction is unprecedented. Not only is the rough superlative in size and quality, but no rough even remotely of this scale has ever been offered before at public auction.”

The Lesedi la Rona diamond was uncovered through a hard rock diamond mining process in Botswana, in the Karowe Mine on Nov. 16, 2015.

After discovery, Lucara Diamond launched a competition to name the rare gem. The winning name translates as “our light” from the Tswana language spoken in Botswana. The reason stated for the name was that “the diamond is a pride, a light and a hope for Botswana.”

Like most diamonds, formed due to the extreme heat and pressure that existed most prominently during the Earth’s own formation, Lesedi La Rona is quite old—thought to be two to three billion years.

The one diamond surpassing Lesedi La Rona in size is the 3,016 carat Cullinan Diamond, which was recovered in South Africa’s Premier Mine in 1905. The Cullinan Diamond produced nine major diamonds, which are part of the British royal family’s crown jewels today.

Though $70 million is a current estimate of the diamond’s worth, according to CNNMoney, the price of the gemstone is not set in stone; it was too large to fit in scanners designed to evaluate a its worth.

Christopher Gemerchak, editor of The Diamond Loupe, tells CNNMoney that buyers will have to evaluate the gem using the old fashioned means of knowledge and eye-testing.

Gemerchak names Antwerp, Belgium—the heart of the diamond trade, as the best location for that to occur, where the greatest expertise is located, “as well as financiers who work with the evaluators and ultimately determine if, and how much, they would bid.”