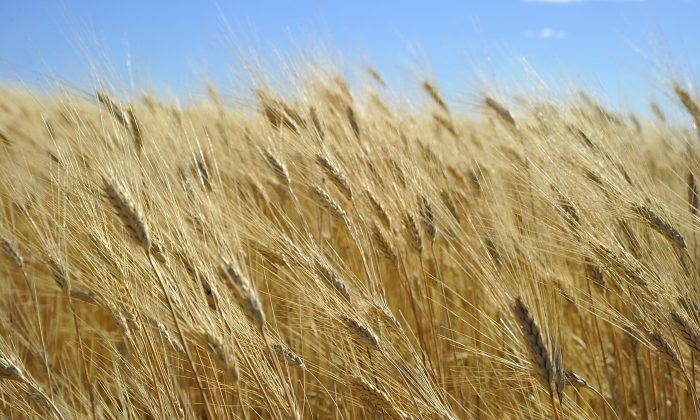 Wheat ready for harvest in North Dakota in this file photo. Unapproved genetically modified wheat found in Oregon, which prompted Japan, Korea, and Taiwan to temporarily suspend imports of wheat from the Pacific Northwest, appears to be isolated, according to the United States Department of Agriculture. (Karen Bleier/AFP/Getty Images)
News

Nearly all U.S.-grown corn and soy are genetically modified, so why not wheat?

The industry is certainly interested. In 2002, biotechnology giant Monsanto submitted an application for a wheat strain engineered with the same herbicide-resistant signature found in its other successful seed crops. Federal regulators deemed it safe, but unlike corn and soy, wheat growers backed away, and approval was never granted.

“For our farmers, their priority is the export market, and it will collapse because of the contamination problem,” said Alexis Baden-Meyer, political director for Organic Consumers Association (OCA) in a phone interview. “It would certainly collapse if we were ever to approve GMO wheat in the United States. Other countries just don’t want it.”

According to Baden-Meyer, crop contamination from genetically engineered specimens are an inevitable consequence of the American agricultural system. With emerging evidence of contamination in Oregon, OCA, Greenpeace, and other food and environmental advocacy groups are calling for a moratorium on biotech test crops.

“There’s really no good solution except to stop these test crops from being grown in open fields next to other crops and certainly when it comes down to it, if you want a non-GMO crop you’re going to have to make sure that your crop isn’t anywhere near a GMO field because of contamination,” she said.

Wheat is the third largest crop in U.S. agriculture, and grown on more land area than any other commercial crop worldwide. While U.S. production has fallen in the last 30 years, the United States remains one of the world’s leading producers.

Continued success, however, all depends upon catering to the customer, and with more than 80 percent of importers opposed to GMO wheat, the market is pretty clear on what the United States can grow.

In 2004, while Monsanto was urging acceptance of biotech wheat among American and Canadian farmers, overseas buyers balked. Norway, Japan, South Korea, and others said that they would switch to a grower in Asia or Europe rather than risk possible contamination from genetically modified organisms (GMOs).

Experts are still not clear how the rogue wheat made its way into an Oregon field nowhere near the former test site. According to a USDA investigation, the episode appears to be an isolated incident, but the discovery presents potential for widespread damage, as the trial was conducted in 16 states.

According to the Center for Food Safety (CFS), federal regulators have “a terrible track record” of overseeing GMO field trials. In a statement, CFS pointed to past lawsuits in Hawaii and Oregon where the U.S. Department of Agriculture was forced to admit field trial contamination incidents that had previously been kept secret.

GMO contamination is common, according to the hundreds of documented cases listed in the Greenpeace contamination register. It can be disastrous for conventional crops. In 2011, bioengineering firm Bayer Crop Science was fined $750 million due to contamination from an unapproved test crop that destroyed an entire rice variety.

“This is what scientists are talking about when they say that GMOs are a threat to biodiversity—it’s because if you lose varieties because they’ve been contaminated you can never get them back,” said Baden-Meyer. “Once it’s contaminated completely, that variety is lost forever to humanity.”

In a statement, Monsanto said it did not believe that plants from a “government directed, rigorous, and well documented” test trial could result in contamination today, as “research highlights that 99 percent of wheat pollen moves less than 30 feet from its source.”

Instead, Monsanto suggests that the escaped GMO wheat is more likely the result of saboteurs, who surreptitiously saved the seed once the trial concluded in 2005, and recently replanted it to implicate the industry, according to Bloomberg News.

“It seems likely to be a random, isolated occurrence more consistent with the accidental or purposeful mixing of a small amount of seed during the planting, harvesting or during the fallow cycle in an individual field,” said Monsanto chief technology officer Robb Fraley in a June 5 phone conference with reporters.

While GMO wheat remains unavailable in commerce, Monsanto is still eyeing the possibility. In 2010 the company began partnerships with Kansas State University and Virginia Tech to improve their wheat breeding programs and generate improved varieties.

The Epoch Times contacted both universities to see what genetic alterations scientists believe might improve GMO wheat marketability, but neither responded by press time.