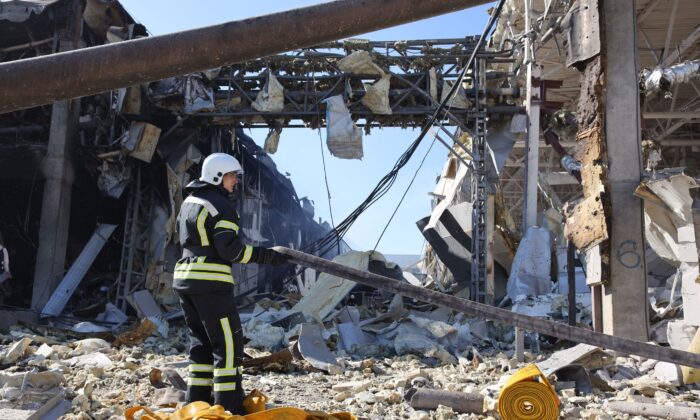 A rescue worker gestures in front of the shopping and entertainment center in the Ukrainian Black Sea city of Odesa, destroyed after Russian missiles strike late on May 9, 2022. (Oleksandr Gimanov/AFP via Getty Images)
Thinking About China

The war in Ukraine is no longer just the war in Ukraine. Nor is it a Russia versus Ukraine situation. It already involves military personnel, equipment, or financial support from countries on three continents.

If the war continues to the detriment of Russia, the argument could be made that we’re witnessing the beginning of World War III.

As Russian Foreign Minister Sergei Lavrov recently said on Russian state media: “NATO, in essence, is engaged in a war with Russia through a proxy and is arming that proxy. War means war.”

Lavrov is right, of course, and therein lies the great risk of escalation. In fact, it may already be all but unavoidable.

That may well be the case because Russia’s army and air forces have been far less effective than what Vladimir Putin—and likely everybody else—expected.

First, it’s important to understand that Putin will continue on his militaristic path. He’s committed—more on that score in a moment.

Since the military option is really the only option as far as policy is concerned, what more can Russia throw at Ukraine?

What more can the Russian military do to gain a favorable outcome?

With the Western nations supplying Ukraine with highly effective weapons, the Russians are at a battlefield resistance level and even disadvantage in some cases that they certainly had not anticipated. As of April 21, Russia has lost 829 tanks and over 170 planes, and suffered over 21,000 casualties.

The momentum of the fight is with the Ukrainians, not the Russians. Low morale and clear Ukraine victories are poisoning the Russian military’s will to fight. Putin knows he has to change the board, or else he personally will pay the price.

But what choices does Putin have?

But the threat isn’t just war, but nuclear strikes against both the UK and the United States. These threats have been expressed on Russian state television and in state publications. Clearly, they’ve been approved for dissemination.

In short, Putin is telling the West that he’s considering all military options. We’d do well to believe him because he has few soft power options. Sure, he can cut natural gas supplies to the European Union, but Brussels is already taking steps to reduce and eventually eliminate its dependence on Russian fuel within months. That option will soon be off the table.

Another gambit is food. By cutting Ukraine’s grains exports, shortages are inevitable. But so far, that hasn’t had the teeth that Putin would have liked it to have.

A third option is cyberattacks, which are already being applied but could certainly escalate. Disabling satellite communications via cyberattack, for example, could be a precursor to a nuclear strike.

What does have teeth is Finland and Sweden’s potential membership in NATO. With this soon-to-be addition to NATO, Putin’s concerns about encirclement by the West are fulfilled. The UK has already openly expressed that a mutual defense arrangement with the two is understood and will soon be codified.

This development effectively adds to Russia’s list of adversaries and expands the war, most likely driving Putin’s insecurity and aggression onward. In response, Russia and Belarus are calling on former USSR nations to form a new USSR. This, too, is escalatory.

These two events could add new potential combatant nations into the conflict.

Who else is Putin calling?

Will China Stand Up or Stand Down?

Russia is asking for China’s help with the material and financing for the war in Ukraine. So far, Beijing has had a muted response.

It’s easy to see why.

The EU and the United States, along with Ukraine, are also urging China to convince Putin to abandon his war. Beijing hasn’t responded to either request. No doubt China is shocked at the incompetence of the Russian military but, at the same time, must stand by its geopolitical partner while protecting its valuable trade relationships with America and Europe.

There is, however, a more compelling argument that Russia may be making to China, which is simply to open a second front to this nascent third world war by advancing on Taiwan.

That option is more to Beijing’s thinking and liking, and will happen sooner than later. The important point to note is that the war in Ukraine is now linked to war in Asia and has potentially accelerated that eventuality.

U.S. intelligence confirms that China is preparing to make a move on Taiwan, which would present a difficult choice for the U.S. administration.

Japan Signs Defense Agreement With the UK and Australia

Beijing’s planned move on Taiwan isn’t lost on Japan, the UK, and Australia. Both the UK and Australia have recently signed mutual defense pacts with Japan to recognize the rising threat that China represents.

What’s more, in light of Japan’s new defense posture that links its security to Taiwan’s, these defense agreements effectively link all three nations to China’s behavior toward Taiwan. It’s not inconceivable that moves by Beijing toward Taiwan may in part be driven by events in Ukraine.

All Options Point to Escalation

The bottom line is that everyone knows that Russia lacks the military capabilities to easily defeat Ukraine. That time has passed. It also lacks the soft power in terms of financial tools that would give it an advantage over Europe.

Russia’s only self-contained power plays against the West are fuel and food, and nuclear war. The effectiveness of the first two is declining rapidly.

And the nuclear option? It rather speaks for itself, doesn’t it?

Other non-nuclear external options are the China option and the few alliances it can make with former Soviet nations, as well as the bad guys in Tehran and Ankara.

But since natural gas sales—one of Russia’s main sources of revenue—will go away in the not-too-distant future, Putin will either have to gain a favorable outcome before that happens or find a way to replace those lost revenues.

Unfortunately, all options would seem to point to rapid escalation.

As for Putin, he has even fewer options, whether political or personal (at this point, they are one and the same). His very survival depends on avoiding defeat.

Again, it would appear that expanding the war is Putin’s best option to stay above the grass.

With both Russia and Putin cornered and fighting for survival, one other simple option presents itself, which would be nothing less than removing Putin from power in any way you can. Surely, those Russian generals who are still alive have considered such a move.

For their sake, and the rest of the world’s, let’s hope they find a way to make that move because, as Putin has made clear, war by proxy means war.

In other words, the war-by-proxy status that the United States is fighting with Russia is very temporary.