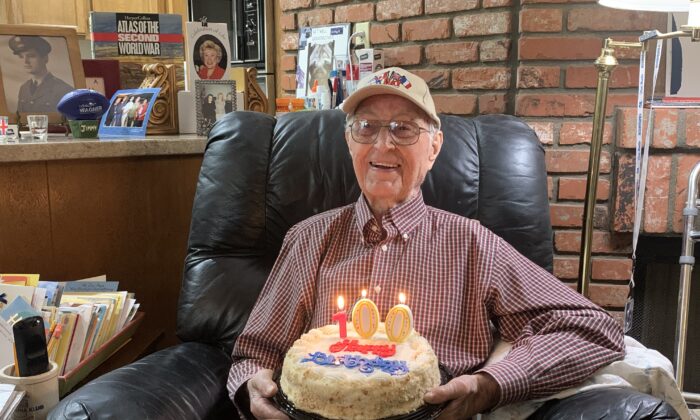 World War II veteran James Bradley celebrated his 100th birthday on Nov. 5 with local officials, fellow veterans, friends, and relatives at his Yorba Linda home in California. He shared with them his cherished memory of the D-Day invasion of Normandy, France.

“He is one of the few World War II veterans and on behalf of a grateful nation, the community came out today to say thank you and happy birthday,” said Orange County Supervisor Don Wagner.

“We absolutely need to make sure they know that they are not forgotten and that they are very much appreciated. And we thank them for the liberty that we enjoy today.”

Tara Campbell, Yorba Linda city councilor and the granddaughter of a WWII veteran, issued a proclamation to Bradley.

“On behalf of the City of Yorba Linda, and as a granddaughter of someone who also served in World War II, it is a great honor for me, as Veterans Day is coming up next week, to thank you for your courageous service to protecting freedom of the United States of America. So thank you for your service, and most importantly, happy birthday on 100 years young,” she said.

Both James Bradley and his elder brother Vincent served in the Normandy Invasion, also known as D-Day, which took place from June 6, 1944, to July 9, 1944, and paved the way for Allied victory and the defeat of the Nazi Reich.

“I feel honored, mostly honored. It had to be done, I was just one of them who helped do it,” Bradley said. “It’s a great thrill that it ended.”

“Omaha Beach was really a bloody beach,” Bradley recalled. He survived the battle, but the Allied troops suffered high casualties.

Encountering US and French Presidents

Bradley was a member of the 926th Signal Battalion attached to the 9th Tactical Air Command, which enabled the U.S. Army with uninterrupted mission command and the ability to rapidly deploy and maneuver across the battlefield.

He also oversaw communication and circuitry to Berlin. Through his guidance and leadership, the lines he managed were frequently used by key leaders in the war, including President Franklin D. Roosevelt and Harry S. Truman.

He shared with The Epoch Times his most memorable moment during WWII.

“I was in Paris when they had the liberation parade to Paris, and I just walked across the street. All of a sudden, people were gathering on the curb, you know, the sidewalk there, vehicles came past really fast. That was Dwight D. Eisenhower, and then behind him was another vehicle with Charles de Gaulle … So [I] always remember, that was quite a thing to experience.”

In 1994, Bradley participated in the 50th-anniversary celebration of the Normandy landing. In 2017, at the age of 96, he and the grandson of President Dwight D. Eisenhower returned to Normandy once again to mourn the soldiers who died in the battle for freedom.

Bradley has been honored for his excellent service numerous times and is named an “Honorary Citizen” of Utah Beach and Sainte-Marie-du-Mont. He is active in numerous conferences for veterans and educates schoolchildren in France on world history.