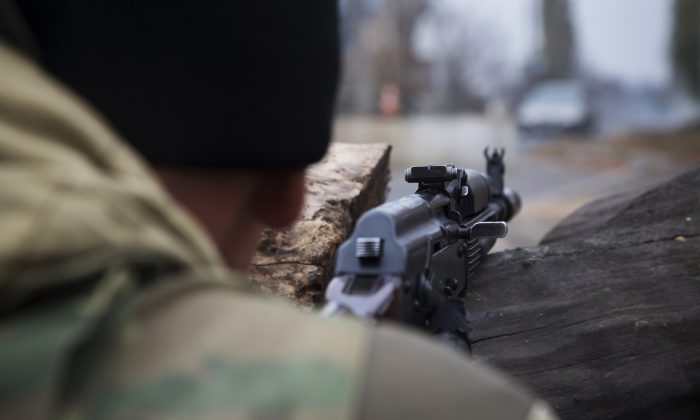 A pro-Russian rebel takes aim at a firing position at a check point not far from Donetsk airport in the city of Donetsk, eastern Ukraine Saturday, Nov. 1, 2014. Fighting intensified in the north of Donetsk between the rebels and government troops ahead of the rebel election on Sunday. (AP Photo/Dmitry Lovetsky)
Europe

The current conflict in eastern Europe between Russia and much of the Western world could easily develop into a nuclear war, according to political activist Noam Chomsky.

Chomsky, who has described himself as a libertarian socialist and often takes positions against the United States, says that the contention in Ukraine between Russia on one side and Europe and the United States on the other could spark a nuclear world war, or a World War 3.

“And it’s come ominously close several times in the past, dramatically close. And it could happen again, but not planned, but just by the accidental interactions that take place,” Chomsky told pro-Russia media outlet Russia Today.

“There have been many cases, not that serious, but pretty close, where human intervention with a few-minutes choice has prevented a nuclear war. You can’t guarantee that’s going to continue.”

Chomsky said that eventually a nuclear war will happen.

“It may not be a high probability each time, but when you play a game like that, with low probability risks of disaster over and over again, you’re going to lose,” he told RT.

“And now, especially in the crisis over Ukraine, and so-called missile-defense systems near the borders of Russia, it’s a threatening situation.”

Russian president Vladimir Putin sparked both condemnation and support recently by threatening the West with his country’s 5,000 nuclear warheads.

“We hope that our partners will realize the recklessness of attempts to blackmail Russia, and will remember the risks that a spat between major nuclear powers means for strategic stability,” Putin told Serbian newspaper Politika in October.

He’s made similar threats several other times this year.

Putin was also accused of making comments in a secret meeting about how Russian forces could arrive at the capitals of about half-a-dozen European countries within two days, including Kiev.

“If I wanted, in two days I could have Russian troops not only in Kiev, but also in Riga, Vilnius, Tallinn, Warsaw and Bucharest,” he said, according to German newspaper Sueddeutsche Zeitung, citing a European Union memorandum of the meeting with Ukraine President Petro Poroshenko and European Commission President Jose Manuel Barraso.

The commission wouldn’t comment on the meeting and Russia denied that Putin made those comments.

Chomsky’s comments also come after former Soviet leader Mikhail S. Gorbachev said over the weekend that the tensions between the major powers have pushed the world closer to a new Cold War.

Gorbachev, now 83, said that the West–particularly the United States–are to blame.

“The world is on the brink of a new Cold War. Some are even saying that it’s already begun,” Gorbachev said at an event marking the 25th anniversary of the fall of the Berlin Wall, close to the city’s iconic Brandenburg Gate.

Chomsky, meanwhile, also claimed that the U.S. is basically running NATO, and that the Western policies such as sanctions are actually pushing Moscow toward China instead of solving anything.

He also said that the U.S.-led coalition against the terrorist group ISIS is illegal and meaningless, and that U.S. whistleblower Edward Snowden made a major contribution by exposing the methods of the NSA to the world.