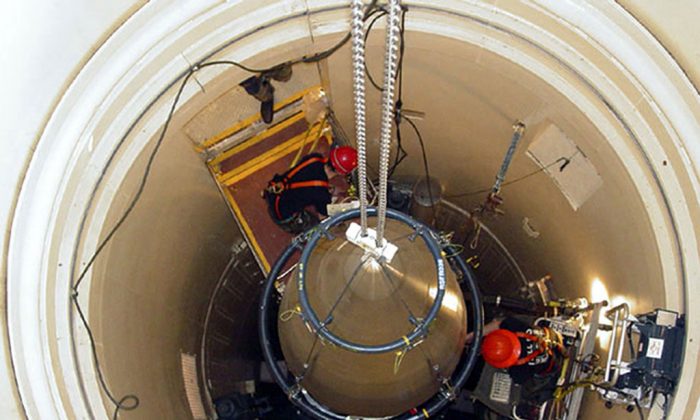 In this image released by the U.S. Air Force, a Malmstrom Air Force Base missile maintenance team removes the upper section of an ICBM at a Montana missile site. An Air Force security team's botched response to a simulated assault on a nuclear missile silo has prompted a blistering review followed by expanded training to deal with the nightmare scenario of a real attack. But an internal review of the exercise held last summer at Malmstrom Air Force Base in Montana said the security forces were unable to speedily regain control of the captured silo, and called this a "critical deficiency." The Associated Press obtained a copy of the report through a Freedom of Information Act request. (AP Photo/U.S. Air Force, John Parie)
Europe

Amid grumblings of a new Cold War with Russia, military strategists, congressional officials, and scientists are saying the United States needs to upgrade its nuclear weapons.

U.S. nuclear weapons on average are 27 years old, and the officials have said there are questions about their reliability. The U.S. hasn’t done any underground nuclear testing since 1992.

In recent months, Russia and the U.S. have taken shots at one another, with American officials accusing the Kremlin of supporting rebels fighting against Ukrainian government forces since April. Meanwhile, Russian media outlets like Pravda have touted Russia’s nuclear arsenal.

“We should get rid of our existing warheads and develop a new warhead that we would test to detonation,” John Hamre, who was the deputy secretary of Defense under President Bill Clinton. “We have the worst of all worlds: older weapons and large inventories that we are retaining because we are worried about their reliability.” He’s now the president of the Center for Strategic and International Studies think tank.

In the past quarter-century, the US has scaled down its nuclear weapons from about 31,000 nuclear weapons to approximately 4,804 weapons. Russia’s arsenal is about the same size.

“After more than two decades, the nuclear deterrent could be in worse shape than we want to believe,” John S. Foster Jr., who was the director of Lawrence Livermore National Laboratory and chief of Pentagon research during the Cold War, told the Los Angeles Times. “We need to demonstrate the proficiency of our weapons labs and our strategic forces.”

“It seems like common sense to me if you’re trying to keep an aging machine alive that’s well past its design life, then you’re treading on thin ice,” claimed Rep. Mac Thornberry (R-Texas), chairman-elect of the House Armed Services Committee, according to the Los Angeles Times. “Not to mention, we’re spending more and more to keep these things going.”

He added: “You don’t know how a car performs unless you turn the key over. Why would we accept anything less from a weapon that provides the foundation for which all our national security is based on?”

And Don Hicks, who was in charge of Pentagon weapons research under Reagan, said the US needs to “start from scratch.”

“We have so much enriched uranium and plutonium left from old weapons that we could use it properly for a new generation of weapons,” he said.

A few weeks ago, Defense Secretary Chuck Hagel said the U.S. will carry out a massive overhaul of the nuclear weapons program.

According to Mother Jones, he said, “We must change the culture of the nuclear force, especially in the Air Force.”