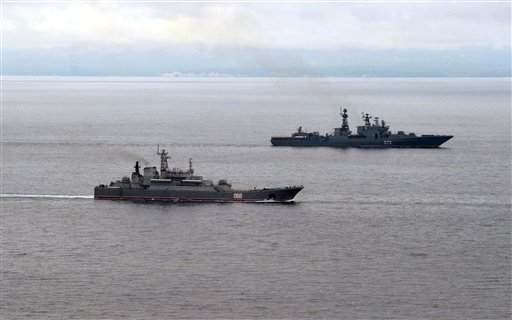 Russia is sending warships toward Australia ahead of the G20 meeting, according to Australian media reports on Wednesday. At the same time, NATO has made claims that Russia is deploying troops into eastern Ukraine.

Defense Force chief Mark Binskin noted its unusual for Russian warships to travel this, suggesting that the Kremlin is attempting to display its power.

“Their confidence? One of them is an ocean-going tug,” he told the website. “It’s just part of their operation. They are in international waters. They are allowed to do that. They are in our approaches and we will continue to surveil them with air and maritime assets.”

Australian officials noted that Russia sent naval warships ahead of international meetings in the past.

“Russian naval vessels have previously been deployed in conjunction with major international summits, such as the APEC meeting in Singapore in 2009. A warship from Russia’s Pacific Fleet also accompanied former Russian President Medvedev’s visit to San Francisco in 2010,” the Defense Force said.

Meanwhile, NATO said that Russian troops have crossed the border into Ukraine.

In response, Russia’s defense ministry denied that its troops were there to help pro-Russian militants. The rebels, however, said they were being helped by Russian “volunteers” but didn’t specifically say the Russian army was helping them.

Donetsk, the eastern Ukrainian city, was hammered by heavy artillery fire on Wednesday morning, say reports. As the BBC notes, it is not clear where the fire came from.

Russia’s defense minister, Sergei Shoigu, also said that the country’s military will carry out long-range bomber patrols, ranging from the Arctic Ocean to the Caribbean and the Gulf of Mexico, reported The Associated Press.

NATO has reported an increase in Russian military flights over the Black, Baltic, and North seas as well as over the Atlantic Ocean.

Shoigu said that “in the current situation we have to maintain military presence in the western Atlantic and eastern Pacific, as well as the Caribbean and the Gulf of Mexico,” per AP.

NEXT: Photos of the Ukraine Crisis