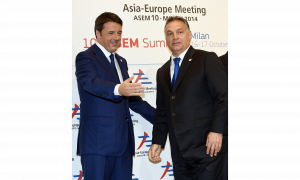 An editorial from state-run broadcaster RT.com is saying that US House members have “brought the nation one step closer to all-out war with Russia” by passing House Resolution 758, which is now sitting on the Senate floor.

House Resolution 758 didn’t get much media attention when it was passed Dec. 4, but in short, it says Russia has been backing rebels in Ukraine, is partially responsible for the downing of Malaysia Airlines Flight MH17 in July, and is backing the Syrian regime. It, however, doesn’t lay out any concrete steps in punishing Russia with sanctions, and it doesn’t have any references to any military intervention.

According to the bill, it claims “the Russian Federation has subjected Ukraine to a campaign of political, economic, and military aggression for the purpose of establishing its domination over the country and progressively erasing its independence.” It adds that Russia’s backing of rebels in Ukraine violates a number of international provisions.

The piece of legislation was introduced and sponsored by Rep. Adam Kinzinger (R-Ill.), who said that the”U.S., Europe and our allies must aggressively keep the pressure on Mr. Putin to encourage him to change his behavior. Sadly, Mr. Putin will only respond to raw power and we must remain unified in our efforts,” according to political news website The Hill.

The resolution also urges President Obama to provide Ukraine government forces with training and equipment. It also slams Russian President Vladimir Putin for the suppression of democracy and media freedom in Russia as well as the arrests of pro-democracy protesters.

The bill aims to affirm the rights of “Ukraine, Georgia, Moldova, and all countries to exercise their sovereign rights within their internationally recognized borders free from outside intervention” and calls on NATO “allies and United States partners in Europe and other nations around the world to suspend all military cooperation with Russia.”

It calls for the “withdrawal of Russia forces from Ukraine,” while making references to the downing of Malaysia Airlines Flight 17 in July that left hundreds dead.

The bill also wants Russia to “to reverse its illegal annexation of the Crimean peninsula, to end its support of the separatist forces in Crimea, and to remove its military forces from that region other than those operating in strict accordance with its 1997 agreement on the Status and Conditions of the Black Sea Fleet Stationing on the Territory of Ukraine.”

MORE: Russia and the West Compete in Eurasian Borderlands

Following its passage on the House floor, the resolution was described by ex-Texas Congressman Ron Paul–a former presidential candidate– as “propaganda.”  He said the resolution “16 pages of war propaganda that should have made even neocons blush.”

Meanwhile, RT.com, which is funded by the Russian government, published an editorial that essentially tries to refute all the points laid out in House Resolution 758 while saying it amounts to promoting an “all-out” war with Russia.

“Before the US Senate votes on HR758, it should ask itself these simple questions, otherwise it risks stirring up a hornet’s nest of problems the world does not need,” the broadcaster states.

“It is the opinion here that the recent upsurge in anti-Russian rhetoric, which is quickly transforming into concrete actions, is not a new phenomenon. Despite the collapse of the Soviet Union, the United States never really shook off its cold war hangover, and moreover, never really wanted to,” the broadcaster adds.

RT.com has come under fire in the aftermath the downing of Flight 17 for blaming the Ukrainian government and denied that Russia wasn’t involved in the crash. This led to the resignation of journalist Sara Firth, who said at the time: “RT style guide Rule 1: It is ALWAYS * Ukraine’s fault (* add name as applicable).”

“I have always said it’s better to have RT than to not have that perspective, but actually with a story like this and the way they misreport it, it’s quite dangerous, I don’t want to be [a] party to it,” she added.

NEXT PAGE – Russia’s economy in trouble?