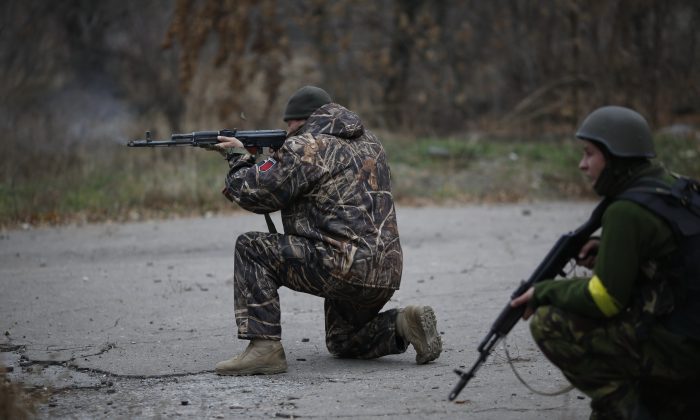 Ukrainian volunteer fighters shoot in the village of Peski near Donetsk, eastern Ukraine, Wednesday, Nov. 12, 2014. Fighting has continued in the east despite a cease-fire agreement between Ukraine and the rebels signed in September, and Ukraine and the West accused Russia recently of sending in new troops and weapons. (AP Photo/Maxim Vetrov)
Europe

Russia has accused the West of trying to uproot the current regime in Moscow, which prompted comparisons to the Cold War era.

Russian Foreign Minister Sergei Lavrov said this weekend: “As for the concept behind the use of coercive measures, the West is making it clear it does not want to try to change the policy of the Russian Federation … they want to change the regime — practically no one denies this,” according to CNN.

Tensions have been growing between the West–named the US and European Union states–and Russia over the conflict in Ukraine. Last week, Vice President Joe Biden visited Ukraine, and said that “Russian behavior represents a flagrant violation of the bedrock principles of our international system,” referring to the rebels currently battling Ukrainian government forces.

Lavrov said that Russia won’t go back to how things were before the Ukraine crisis.

“The EU is our largest partner,” Lavrov said, according to RT. “Nobody is going to shoot himself in the foot and reject cooperation with Europe, but everyone understands that it won’t be business as usual anymore.

“But we don’t need the kind of business we had. [That] was like ‘Russia must do this and must do that,’ and we want to cooperate as equals,” he continued.

After Lavrov delivered his statements, Russia expert Ben Judah–who has written a book on Russia under President Vladimir Putin–said it marked a “new low in relations” between the Kremlin and the West.

“Not since 1984 has a Russian foreign minister described ties with the West and its plans for “regime change” in such dark terms,” Judah said on Twitter. He also asked: “Has the Kremlin returned to it’s Cold War strategy of trying to break NATO via sponsoring France extremists – just this time the right wing?”

The conflict in eastern Ukraine has killed at least 4,000 people since April.

Biden said Friday that the takeover of Crimea will remain a problem that threatens US-Russia relations.

“Let me say as clearly and categorically as I can, America does not and will not recognize Russian occupation and attempted annexation of Crimea,” Biden stated. “We do not, will not, and insist others do not accept this illegal annexation.”

A few days ago, Russia issued a warning to the US to supply “lethal defense weapons” to Ukraine.

Spokesman for the Russian Foreign Ministry Alexander Lukashevich said, “We paid attention not only to such statements, but also to the trip of representatives of Ukrainian volunteer battalions to Washington, who try to win support of the US administration… This is a very serious signal for several reasons,” according to state-run Russia media.