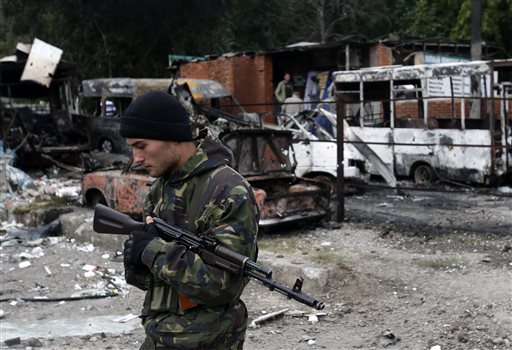 As fears of a World War 3 increase, a Pro-Russian rebel guards damaged shop and cars after shelling in the town of Donetsk, eastern Ukraine, Tuesday, Sept. 16, 2014. The city council in Donetsk says three people have been killed and five wounded in shelling overnight in the city in eastern Ukraine. The casualties come as Ukraine's parliament plans to review a bill that would give greater autonomy to the eastern regions of Donetsk and Luhansk, where fighting between separatists and Kiev's forces has claimed at least 3,000 civilian lives. (AP Photo/Darko Vojinovic)
Europe

Officials in Poland, Latvia, Lithuania, and Estonia say a Russian invasion could happen if pro-Russian forces end up seizing more of Ukraine.

Russia seized Crimea early in the conflict and pro-Russian separatists have gained other ground since then.

Officials in Poland, among other countries in Eastern Europe, fear that Russia, having swallowed Crimea, will be tempted to grab more of Ukraine.

That could turn out to be southern Ukraine, which Putin and Russians now refer to as Novorossiya, or “New Russia.”

If that land grab happened, Poles fear Poland and the Baltic states would be next, with Putin arguing that he was defending the interests of oppressed Russian minorities, as in Ukraine.

“Putin has worked the West out,” a Polish official told Financial Times. “He knows we won’t use force.”

“The darkest Polish scenario is also that Putin may be tempted to go up to the nuclear brink by using conventionally armed missiles that could carry nuclear warheads. The dangers of such a policy hardly need spelling out. But destroying the credibility of Nato’s security guarantee to the Balts — and therefore of Nato itself — will be a tremendous prize for Russia,” columnist Gideon Rachman wrote.

On the other hand, many Russians feel that Putin is actually being “very cautious,” represented by Vyacheslav Nikonov, chairman of the Russian parliament’s Education Committee and the grandson of Vyacheslav Molotov, who served as Joseph Stalin’s foreign minister for many years.

Nikonov said that his grandfather “would have invaded Ukraine and taken it in a week.” As with most Russians, he pins the blame for the conflict on American aggression, arguing that there are foreign troops and military advisers in Ukraine–but that they’re American, not Russian.

Both Russians and the Polish–among other countries in the area–agree that the conflict could soon erupt into a World War 3 scenario involving a range of European countries as well as the United States.

“This is the most dangerous moment in relations between Russia and the West since the Cuba missile crisis,” Nikonov said.

“If I wanted, in two days I could have Russian troops not only in Kiev, but also in Riga, Vilnius, Tallinn, Warsaw and Bucharest,” he said, according to German newspaper Sueddeutsche Zeitung, citing a European Union memorandum of the meeting. Russia later disputed the comments.

New NATO chief Jens Stoltenberg sought this week to reassure Poland while speaking publicly there about the situation in Ukraine, saying that NATO is ready to protect and defend each of its allies, a message of reassurance meant to alleviate Poland’s fears. Since the conflict in Ukraine began this year Polish leaders have repeatedly called for NATO to do more to protect their country.

Stoltenberg later met with allied airmen at a base in Lask, in central Poland, to stress the growing importance of their mission as they patrol East European skies in their F-16 fighters and AWACS surveillance plane.

All sides of the conflict say that keeping the current ceasefire in place is crucial but fighting has continued at some places, including Donetsk, which is held by pro-Russia separatist fighters.

Ukraine security spokesman Andriy Lysenko said that the rebels are working hard to capture the airport in the city, firing on the terminal from tanks, artillery systems, and multiple rocket launchers.

While the airport does not bear immediate tactical significance for separatist forces devoid of any air power, the terminal’s proximity to their primary stronghold is viewed as potentially undermining their longer-term security goals.

Rebels and government officials regularly trade accusations over who is responsible for the civilian deaths.

Rebels accuse of government forces of unwarranted and arbitrary attacks on the civilian population.

Meanwhile, the Organization of Security and Cooperation in Europe is next week expected to come into delivery of two drones that will enable it to improve efforts to monitor violations of the Sept. 5 cease-fire agreement.

Ukrainian President Petro Poroshenko told a delegation of officials from OSCE member states Tuesday that he eventually wanted to see 1,500 observers deployed in the east and that at least 29 drones be put at their disposal.

Since unrest began, Ukraine has appealed for a broad array of foreign support, including military aid.

A convoy of 112 trucks carrying German aid destined for eastern Ukraine crossed into the country from Poland on Tuesday, the Development Ministry in Berlin said.

The aid, which was trucked to the border from 17 German cities, will be taken to a distribution center near Kiev. There, the goods will be loaded onto other trucks for the journey to cities including Kharkiv, Mariupol and Slovyansk, and items bought in Ukraine will be added. The Ukrainian Red Cross is responsible for distributing the aid, the German government said.

Also this week, Putin celebrated his 62nd birthday in the wilderness of Siberia while supporters across Russia created tributes and held celebrations and parades in his honor.

Putin celebrated his birthday Tuesday in the Siberian forest some “300-400 kilometers (185-250 miles) from the nearest populated area,” his press secretary told Russian news media. Putin has often brandished his tough-guy image with widely publicized wilderness romps during which he hunts, fishes or rides horses — often while shirtless.

In Grozny, the capital of Chechnya, thousands carried a 600-meter-long (650 yards) Russian flag through the streets. Others dressed in the red, white and blue of the Russian tricolor walked through the streets as an enormous human flag, many of them holding portraits of the Russian leader over their heads. Ramzan Kadyrov, Chechnya’s president, wrote on his official Instagram account that there were 100,000 participants.

Russian news websites published photographs from a one-day exhibition in Moscow titled “The 12 Labors of Vladimir Putin,” in which Putin is depicted as Hercules — battling Western nations disguised as serpents and monsters or taming an ox bearing the symbol of Crimea, the Ukrainian region annexed by Russia in March.

Putin’s always-high ratings have skyrocketed this year as he responded to a pro-European uprising in Ukraine by seizing Crimea, and reacted defiantly to Western sanctions.

His approval rating remains at 86 percent according to the independent Levada Center, which conducted a poll in September with a margin of error of plus or minus 3.4 percent.

Souvenirs decorated with Putin’s face have become best-sellers on Red Square, while Russian designers have made him the theme of pricey T-shirts and sweaters.

Patriarch Kirill, head of the Russian Orthodox Church, congratulated Putin on his birthday and said his tenure in office had become “an integral part of national history.”

However, as the value of the ruble sinks under pressure from sanctions, some online commentators were less enthusiastic: “The dollar is 40 (rubles), the Euro is 50 (rubles), and Putin is 62,” was one joke that spread across the web.