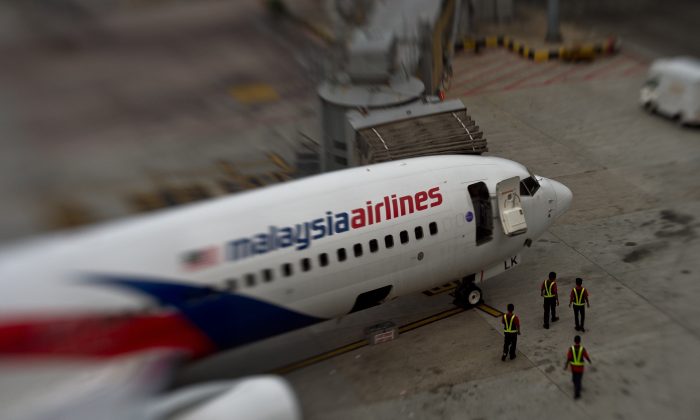 In this picture taken with a Tilt and shift lens, groundstaff walk past a Malaysia Airlines plane parked on the tarmac at the Kuala Lumpur International Airport in Sepang. (Manan Vatsyanyana/AFP/Getty Images)
Social Media

The most predominant theory is that Russia wanted to start “World War III” by directing rebels in Ukraine to allegedly shoot the plane down.

Others have again posited that UFOs were involved in the plane crash. After Flight 370 went missing, that was a common theory being spread around.

There’s no proof of any of the theories. Officials have yet to carry out an investigation of the plane crash.

Ukrainian officials are now claiming that Russian-backed rebels were involved in the downing of the plane. Ukrainian President Petro Poroshenko described the plane going down as an act of terrorism, according to The Associated Press.

On Twitter, users have already started tweeting their ideas.

“I’m trying to research why Malaysia airlines is always in a world mystery .. What is the conspiracy or reason behind these events !!!! ???” one person wrote.

Added another, “Cmon, they expect us to believe this is a coincidence? Cmon. Malaysia flight crashes in Ukraine.”

Said another, “Smh this is another conspiracy though. Malaysia plane shot by Ukraine? USA intervening? We’re being kidded again.”

“Another plane of the same malaysian airlines ‘shot down’ by ‘terrorist’ I’m feelin a world war 3 comin on,” said another.

Just minutes after the plane went down, a popular conspiracy-related website uploaded one which claims that IMF director Christine Lagarde had something to do with it. The site also says the plane was shot down on 7/17/14 or 17/7/14 after it was built “17 years ago.”

The Kremlin website published a statement late Thursday that says “the Russian leader informed the U.S. president of the report from air traffic controllers that the Malaysian plane had crashed on Ukrainian territory, which had arrived immediately before the phone call.”

The statement gave no further details about what the leaders discussed with regard to the plane crash. The rest of the phone call was dedicated to the general situation in eastern Ukraine, and recent U.S. sanctions against Russian individuals and companies.