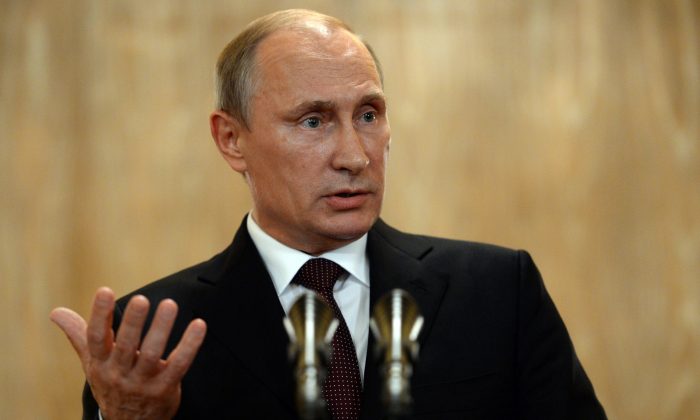 Russian President Vladimir Putin gestures as he speaks at a news conference after the ASEM summit of European and Asian leaders in Milan, Italy, Friday, Oct.17, 2014. Putin met with Ukrainian President Petro Poroshenko and key Western leaders in an attempt to negotiate a full end to hostilities in Ukraine that could ease sanctions against Russia. (AP Photo/Vasily Maximov, Pool)
Europe

Fears of Russia invading countries outside of Ukraine are growing as the “provocations”–including incursions into the sea and air–increase.

The latest is a Russian submarine reportedly detected just outside Stockholm in Sweden, prompting a swift response from Swedish military.

“What’s happening in the Stockholm archipelago is a serious matter,” Karin Enström, who was Sweden’s defence minister until the elections this autumn, told Newsweek.

“Russia is modernising its military equipment and testing it, but there are also more military exercises. It’s a sign of Russia increasing its military capabilities, both when it comes to equipment and fighting abilities. These developments in combination with the war in Ukraine are very serious and alarming. Ukraine is impacting on our part of the world very negatively.”

Other countries near Ukraine, such as Latvia and Lithuania, are seeing Russia bulk up its military.

Latvia’s ministry of defence says that in 2010 there was only one Russian military vessel spotted close to its waters–but this year there have been more than 40. And the number of Russian military approaches to Latvian airspace resulting in scrambles has jumped from five in 2010 to more than 180 this year, a similar jump seen in Lithuania. Estonia is also dealing with problems, such as Russia abducting one of its intelligence officers. Finland is dealing with similar issues.

“Russia is trying to position itself as a dominant centre of power on the global stage,” noted a high-ranking Latvian official. “Its ambitions are not limited to Ukraine.”

“Today Russian provocations are on the minds of decision-makers in the region when they make their decisions,” added Finnish security expert Pauli Järvenpää.

Russian President Vladimir Putin stunned many when he told two high-ranking officials in September that Russian troops could reach the capitals of Latvia, Lithuania, Estonia, Poland, and Romania in just two days.

“If I wanted, in two days I could have Russian troops not only in Kiev, but also in Riga, Vilnius, Tallinn, Warsaw and Bucharest,” he told Ukraine President Petro Poroshenko and European Commission President Jose Manuel Barraso in a closed door meeting.

If Mr Putin were to act on this, Britain could find itself at war with Russia. All five countries mentioned in this alleged conversation are members of both the EU and NATO. They are covered by the security guarantee in Article V of Nato’s founding treaty, which states that ‘an attack on one is an attack on all,'” noted the Telegraph.

However, some are defending Russia’s actions, saying that the country is alarmed by the increased presence of Nato forces in the Baltic region.

“There is no reason to think these incursions will stop; checking up on other people’s security systems is standard practice among major powers. But although Russia continues to act like a superpower, it is mainly appealing to a national audience,” wrote Professor Andrew Lambert, a professor of Naval History in the Department of War Studies at King’s College London.

“In reality, Russia is not going to attack Sweden, or the Baltic States … Putin would not like to see a repeat of the humiliating events of 1981, when a Russian submarine was seen by the whole world to be parked on the Swedish coast. He wants to distract attention from Donetsk, not start another conflict.”