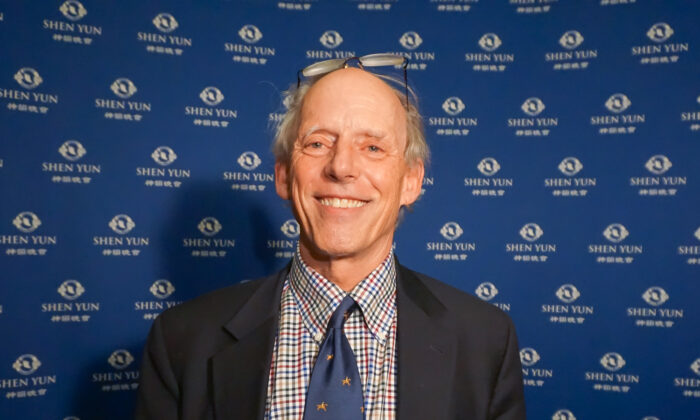 BALTIMORE—An artistic phenomenon from New York is touring the world and bringing people to tears with its beautiful stage production and deep themes. Shen Yun Performing Arts is the world’s premier classical Chinese dance company and tonight it opened at The Hippodrome Theatre in Baltimore, Maryland, where investment advisor and world traveler Robert Travers said he was moved to tears and was inspired to give the company a multi-thousand-dollar donation to continue their work.

“This is sophisticated. This is elegant. The music is unbelievable. The dance will blow you away, and this represents all I hold dear, which is elegance, sophistication, and … I have goosebumps right now, this is so awesome.

“I want to make a large donation to have [Shen Yun] come back again and bring friends. So, I’m going to talk to [a] manager here about making [a] significant multi-thousand-dollar donation. This is incredible,” Travers said.

“What I like about this is it’s spiritual,” he said. “I feel like … This is so awesome. I am grateful for this. Thank you.”

Shen Yun’s mission is to revive China’s authentic and deeply-spiritual culture that was almost lost. Once known as The Divine Land, China’s 5,000-year history is full of legends about heavenly beings who bestowed cultural treasures like dance, music, and fine art to mankind.

A Shen Yun performance includes depictions of these ancient legends, such as the belief that the Creator will one day return to earth and reward those who choose kindness and compassion over violence and hatred.

This aspect of the show touched Travers the most.

An example of what Travers referred to in the performance is a dance piece titled “Abetting the Wicked,” about the persecuted spiritual practice known as Falun Dafa. Falun Dafa teaches three principles truthfulness, compassion, and tolerance, and five energy-strengthening exercises. The Chinese Communist Party has been carrying out a violent campaign of terror against Falun Dafa since 1999.

In “Abetting the Wicked,” two brothers find themselves on opposite sides of the persecution, having to choose between family and faith and an atheistic regime that instructs its members to hurt innocent people.

Good over evil. Beauty, music, theater. This is the greatest story ever, ever that I’ve seen, and I’ve been all over the world. I love it.
— Robert S. Travers

“Everyone should watch this. If they don’t, it’s the biggest mistake in their life,” Travers said.

Shen Yun includes singers who are trained in the ancient bel canto tradition who sing original songs that convey themes such as divine hope and the dangers of atheism.

“This is great,” he said. “This is more than—this is so important. If I had children, they would be coming here to learn what it means to do the right thing. To embrace goodness, to take care of your fellow—this is so awesome.”

He said he would bring home something very special from tonight’s performance: “Happiness, and the good thought that there is still greatness out there. This is beyond greatness.”

Travers had words of gratitude for Shen Yun’s artists: “Thank you so much for bringing this to us. Thank you.”

“I have goosebumps. It is so special. I want to bring all of my friends to this next year,” he added.