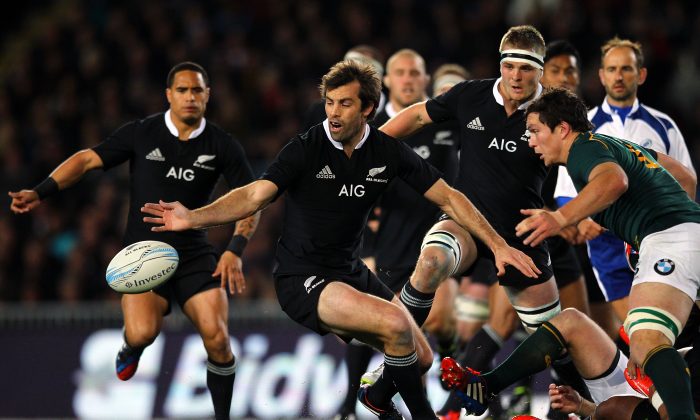 The mental focus is clear ... as All Black centre Conrad smith pursues the loose ball when they last met South Africa in the Rugby Championship at Eden Park on Sept 14, 2013. (Anthony Au-Yeung/Getty Images)
International

‘World Title’ on the line as ’Boks Face All Blacks

The All Blacks will storm the Ellis Park fortress in Johannesburg this weekend, intent on winning the Rugby Championship by beating the resurgent Springboks.

The ’Boks and their fans are still bristling over the Auckland loss to the All Blacks, when referee Romain Poite unfairly sin-binned hooker Bismarck du Plessis.

The sense of injustice that fans feel will add to the emotion among the 80,000 ’Boks supporters attending Saturday’s (Oct 6) game. The All Blacks last played the Springboks at Ellis Park nine years ago.

The South Africans are confident for a number of reasons. These include:
• Man-for-man the Springboks compare well with the All Blacks, who top the international rankings.
• Ellis Park is a graveyard for visiting international sides.
• Despite losing at Eden Park, the ’Boks were dominant in the scrums and line-outs.
• Simple errors cost the ’Boks dearly at Eden Park, including one error by the referee.

While South Africa might beat NZ, they need a bonus-point victory to win the championship, which means winning and scoring four tries, or winning by more than eight points.

Without the need for the bonus-point victory, the ’Boks would focus on forward encounters, aiming to gain dominance there first.

In this game, the tactics will be the same … but everything will be underpinned by the need for a bonus-point.

Whatever the tactics—and however well the ’Boks apply them—the players will have two goals in mind.

Rugby is complex; single-mindedness is crucial. Every player is constantly making choices according to the plan—marrying two plans together is unworkable, but necessary for the ’Boks to win the championship.

The Springboks have the ability to score four tries, despite their forward-focussed approach. The problem is, the All Blacks would love to play a more open game, which suits their attacking—and counter-attacking—strengths.

All Black coach Steve Hansen anticipated that, saying: “They are going to have to play some rugby. That will suit us as much as it will suit them.”

Two things are guaranteed. The match will be ferocious and brutal. That has been a constant in all the games between these sides, with the intensity increasing according to the occasion.

A lot could be written as to why this is so, as it is a reflection of the history and the culture of both countries. But the primary reason for the brutality is, it is necessary.

The All Blacks and the Springboks are the giants of rugby, present and past. This match will determine the game, the championship, and the No.1 ranking—in many people’s mind, if not in the IRB rankings.

Add injustice to the mix, and the game transcends the championship and becomes about national identity.

Johannesburg lies at the heart of that identity. Afrikaner’s faced the might of the British Empire there. Mahatma Gandhi spent time there, possibly contemplating the demise of the same empire.

As rugby writer Ben Susan wrote: “This is not Cape Town with its seductive beauty and cosmopolitan charm. This is Johannesburg and this is rugby war.”

Accepting the martial nature of the game, All Black captain Richie McCaw said he would “hate” to win by aggression alone—“we’ve got to be smart as well.”

Experience and composure favours the All Blacks, who are unbeaten in 11 Rugby Championship matches. Last week against Argentina they became the first team in the championship to score five successive away-wins.

Their composure was shown in La Plata when All Black winger Ben Smith scored right on full-time, securing the bonus-point that is proving so valuable.

Smith and his equally adept back-three partners Israel Dagg and Julian Savea, are a dangerous counter to the Springboks kicking game, which worked well against Australia last week.

Having said that, the Springboks back-three, led by superstar Bryan Habana, is equally dangerous.

So it is through all the positions, with massive match-ups across the park.

The partisan, rugby-wise Ellis Park crowd will boost the ’Boks—and place huge pressure on the referees.

Of all the teams in international rugby, the All Blacks are best able to ignore a hostile crowd—but the crowd will affect even them.

After being re-admitted to international rugby in 1992, the Springboks played their first Test at Ellis Park—fittingly it was against the All Blacks, who won 27-24.

Since 1928, the Springboks have lost three times to the All Blacks at Ellis Park, with the ’Boks winning 10 of 13.

All the players know they are writing themselves into the illustrious history of Ellis Park, adding to their motivation.

Either side could win.

The winner of the game will be the champion—even if the winner fails to win the Rugby Championship, or fails to top the IRB rankings.