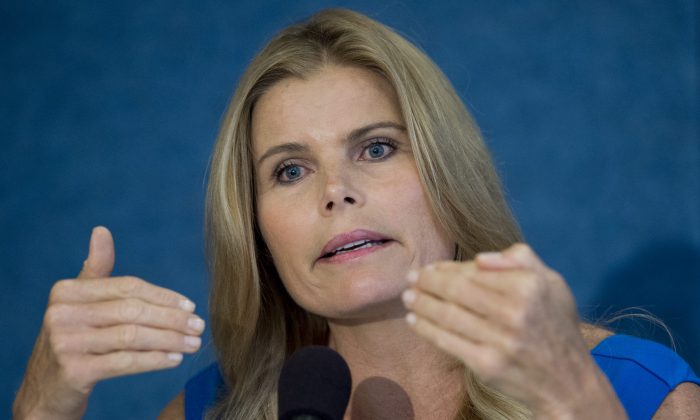 Actress and activist Mariel Hemingway speaks about suicide prevention and her movie “Running from Crazy” in Washington, D.C., on June 20, 2013. There have been seven suicides in her immediate family, including her grandfather, famed American novelist Ernest Hemingway, and her sister, actress Margaux. (Saul Loeb/AFP/Getty Images)
Opinion

World Suicide Prevention Day: How Communities Can Work Together to Prevent Suicide

The death of comedian Robin Williams last month sparked a worldwide discussion about suicide, its underlying causes and how it might be prevented.

And, with World Suicide Prevention Day taking place Sept. 10, the subject is certain to generate more debate as people seek to understand this important health issue.

Having spent 10 years researching the subject while working as a professor of psychiatry, I believe there are things we can do as a community to tackle this problem. With that in mind, I thought it might be helpful to reflect on what researchers have learned over the years about strategies for preventing suicide.

First, it is important to understand suicide, like other medical conditions such as cancer and heart disease, is complex. There is no singular cause of suicide. People who attempt or die by suicide often have stories of adverse childhood experiences, onset of depression, anxiety, substance use problems, loss of social support, financial stress, medical problems, and impulsive/aggressive personality style. Our work in First Nations communities in Canada has also demonstrated the importance of loss of culture, residential school trauma, and racism as a risk for suicide behavior.

Yet, the majority of people who experience many of these issues do not die by suicide or attempt suicide. Why does one person attempt suicide while another person with the same stressor does not? This question remains unanswered.

Generally speaking, most suicide prevention programs take a broad public-health approach with a view to reducing everyone’s risk for suicide.

For example, increasing awareness of suicide and the importance of getting appropriate treatment to reduce suicidal behavior is an important goal of World Suicide Prevention Day. Other promising community level initiatives include positive-parenting programs and school-based programs such as the Good Behavior Game, which involves teams of students competing for points based on how they act in class.

Reducing access to lethal means such as firearms, pesticides, carbon monoxide, and quantities of medications has been shown to be associated with reduced suicide. Fifteen years ago, the United Kingdom moved to limit acetaminophen to 28 tablets per bottle. Since then, there has been a reduction in overdose death related to acetaminophen in the U.K., without a commensurate increase in suicide with another method. In Manitoba, researchers are examining whether similar action may reduce the risk of suicide and unintentional overdose deaths in this province.

Families bereaved by suicide often struggle with guilt, anxiety and depression. Interventions to help families cope with family members who are struggling with suicidal behavior are required. I have always been surprised that a public health nurse comes to the new mother’s home to ensure that the mom and baby are doing well. But when there is a suicide in a family, there is no outreach to see how the family is doing after this awful event. We are considering pilot testing the utility of such an outreach program.

At the individual level, the period of highest risk for suicide is during the first six months after the onset of a physical or mental illness. Increasing access to crisis services and evidence-based treatments for depression, anxiety, psychosis, and substance use disorders have shown to be associated with reductions in suicide. There is strong evidence improving primary-care physician education in the assessment and treatment of depression reduces suicide. Specialized mental-health teams that focus on mental-health problems and addictions are extremely important in suicide prevention.

Dr. Jitender Sareen is an expert adviser with EvidenceNetwork.ca, professor of psychiatry at the University of Manitoba and team leader of the Manitoba Population Mental Health Research Group. This article previously published at TroyMedia.com.