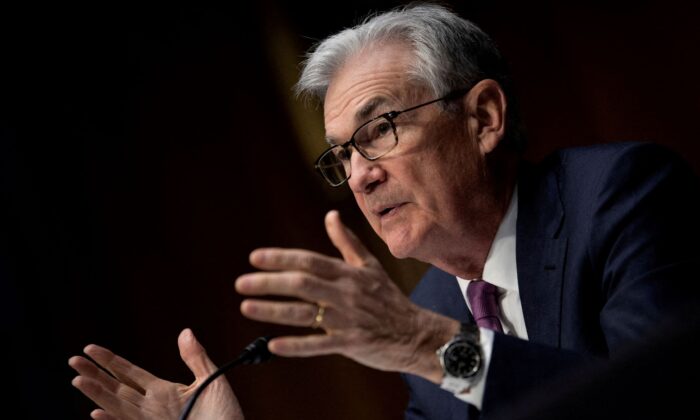 Federal Reserve Board Chair Jerome Powell speaks during his re-nominations hearing of the Senate Banking, Housing, and Urban Affairs Committee on Capitol Hill, in Washington on Jan. 11, 2022. (Brendan Smialowski/Pool via Reuters)
Stocks

LONDON/SYDNEY—World stocks were flat on Friday and the dollar edged up as traders and investors awaited a speech from Federal Reserve Chair Jerome Powell for clues on the gradient of the U.S. central bank’s rate-hike path.

Investors have pared back expectations that the Fed could pivot to a slower pace of rate hikes, as U.S. inflation remains at 8.5 percent on an annual basis, well above the central bank’s 2 percent target. But Powell’s speech at 1400 GMT at the Fed’s annual conference at Jackson Hole will be scrutinized for any indication that an economic slowdown might alter its strategy.

“The Fed and other central banks have been falling asleep at the wheel over inflation, now they are desperate to regain [credibility],” said Luca Paolini, chief strategist at Pictet Asset Management.

“Economists are clearly calling for the Fed not to blink, and if anything accelerate the pace of tightening.”

MSCI’s world equity index was little changed and was heading for a modest 0.5 percent drop on the week.

German consumer sentiment is set to hit a record low for the third month in a row in September as households brace for surging energy bills, a survey showed, while French consumer confidence unexpectedly rose in August.

Overnight on Wall Street, stocks rose while Treasury yields slipped, as investors digested comments from Fed officials who continued hammering the point that they will drive rates up and keep them there until inflation has been squeezed from the economy.

“So it is a fair bet that the Powell speech will take a similar turn today,” said Robert Carnell, regional head of Research, Asia-Pacific, at ING.

“If so, the most likely market reaction would be a rise in yields at both the front and back of the yield curve, a sell-off in equities and dollar strength, as markets seem to have been positioning themselves for a more supportive set of comments.”

The dollar firmed by a slight 0.1 percent against a basket of major currencies, close to recent 20-year highs.

A surge in Chinese tech shares listed in Hong Kong ran out of steam though the index was up 0.55 percent, while Chinese shares, gripped by domestic economic worries and Fed rate hikes, dipped 0.2 percent.

Oil rose on signs of improving fuel demand, although further gains were capped as the market awaited Powell’s speech.

By Carolyn Cohn and Stella Qiu