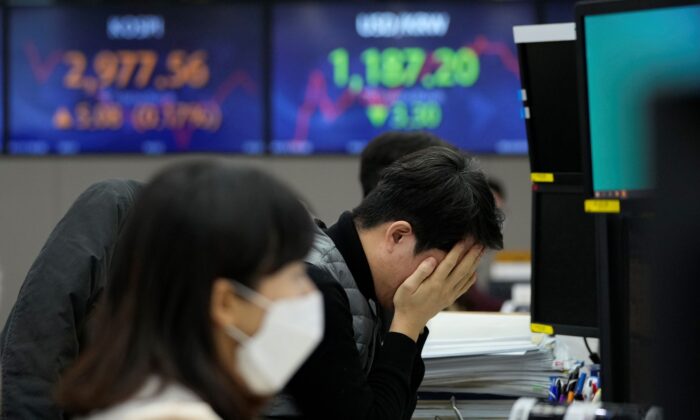 A currency trader covers his face with his hands at the foreign exchange dealing room of the KEB Hana Bank headquarters in Seoul, South Korea, on Jan. 13, 2022. (Ahn Young-joon/AP Photo)
Stocks

BANGKOK—Shares were mostly lower in Asia on Thursday after the latest report of surging prices in the U.S. appeared to keep the Federal Reserve on track to raise interest rates in the coming months.

London, Paris, Tokyo, and Shanghai were lower while Sydney and Hong Kong advanced.

Surging coronavirus cases have been raising uncertainty about the pace of recovery from the pandemic.

Britain and Germany have endured severe waves of the highly contagious omicron variant of coronavirus. France is at the epicenter of Europe’s current fight against COVID-19, with new infections topping 360,000 a day in recent days.

In Asia, the omicron variant has swept across Australia and is gaining ground in other countries despite vaccine and mask requirements and strict border policies. Japan reported more than 13,000 new infections on Wednesday, the highest level in four months. China, whose zero-COVID-19 policies are being challenged by outbreaks just weeks ahead of the Beijing Winter Games, is testing and in some cases locking down entire cities.

The yield on the 10-year Treasury was steady at 1.74 percent.

Apart from the direct impact from big coronavirus outbreaks on normal business activity, spill over effects on manufacturing and shipping could further hinder a rebound from the past two years of disruptions.

“So far, the market’s reaction to the omicron wave has been moderate, but it is worth paying attention to worries about further impacts to global supply chains which could trigger risk-off trade,” Anderson Alves of ActivTtrades said in a report.

Investors were focused on a report from the Labor Department, which showed consumer prices jumped 7 percent last month. That’s the fastest year-over-year pace in the consumer price index in nearly four decades. The sharp increase, which was in line with economists’ forecasts, came a day after Fed Chair Jerome Powell told Congress that the central bank stands ready to raise rates to fight inflation.

Wall Street has been closely watching rising inflation to gauge the impact on businesses and consumers, as well as on the Fed’s plan to trim its support for the economy and markets.

Businesses in many industries have been passing higher costs off to consumers, but have been warning that they will still feel a financial impact because of higher prices and supply chain problems.

Wall Street will get another update on rising inflation on Thursday, when the Labor Department releases December results from an index based on U.S. wholesale prices. It shows how inflation is affecting costs for businesses.

Investors are also closely watching the latest round of earnings to see how companies are dealing with inflation.

In other trading Thursday, U.S. benchmark crude oil lost 19 cents to $82.45 per barrel in electronic trading on the New York Mercantile Exchange. It gained $1.42 to $82.64 per barrel on Wednesday.

Brent crude, the basis for pricing international oils, lost 15 cents to $84.52 per barrel.