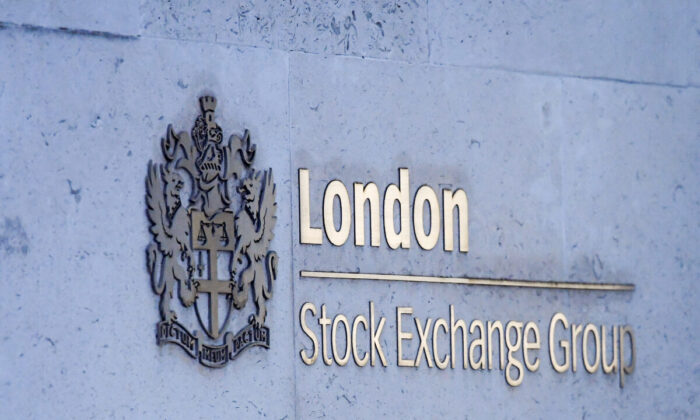 The London Stock Exchange Group offices are seen in the City of London, on Dec. 29, 2017. (Toby Melville/Reuters)
Stocks

LONDON/SHANGHAI—World stocks recovered ground on Wednesday as markets watched for signs of light in the Ukraine conflict, while Treasury yields hit their highest since mid-2019 in anticipation of the first U.S. interest rate hike in three years.

Russia’s foreign minister Sergei Lavrov also said some formulations of agreements with Ukraine were close to being agreed.

Western governments have slapped tough sanctions on Russia for the invasion, which Moscow calls a “special operation.”

“These sanctions probably are working, hopefully that will put some pressure on both sides to get around the table and negotiate,” Gregory Perdon, co-chief investment officer at Arbuthnot Latham, said. He added that the invasion could dampen the pace of Fed rate hikes.

“I don’t see this as a flash in the pan military conflict, it has resulted in a big shock to the oil market.”

Investors are expecting the U.S. Federal Reserve to raise interest rates by at least 25 basis points amid surging prices later on Wednesday. Traders will also be closely watching the Fed for details on how it plans to end its bond-buying program.

The MSCI world equity index rose 0.87 percent, moving away from one-year lows hit in the previous session. S&P futures gained 0.79 percent after U.S. stocks enjoyed a relief rally overnight on Wall Street, driven by hopes of a resolution in Ukraine.

Chinese stocks were up 4.2 percent.

Russia has $117.2 million in interest payments due on two dollar-denominated eurobonds on Wednesday. Its finance ministry has said it will make the payments in roubles if sanctions prevent it from paying in dollars—a move markets would view as a default.

The U.S. dollar was down 0.2 percent against a basket of peers, trading at 98.708, and steady versus the yen at 118.30 albeit close to the previous session’s five-year high.

Japan reported a wider-than-expected trade deficit in February as an energy-driven surge in import costs caused by massive supply constraints added to vulnerabilities for the world’s third-largest economy.

“If one of the balls is ignored it is possible that they all go everywhere, in the shape of prices going berserk.”

Oil prices have been volatile since the Ukraine invasion.

By Carolyn Cohn and Andrew Galbraith