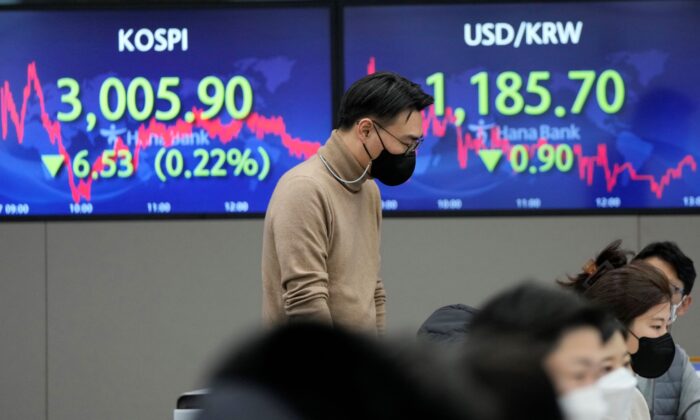 BANGKOK—Major world share benchmarks were mixed at the outset of the last trading week of the year as countries grappled with the spread of the omicron coronavirus variant.

Benchmarks were flat early Monday in Paris and Frankfurt and fell in Shanghai, Bangkok, Tokyo, and Seoul. Taiwan and India were higher. London and some other markets were closed for holidays.

Comments by China’s central bank, over the weekend about support for the slowing economy highlighted differences in stances among countries trying to balance support for economic recoveries from the pandemic with measures to keep inflation in check.

The Federal Reserve is among a handful of central banks that have already begun cutting interest rates or otherwise cutting back on the extra support they provided when the pandemic first slammed world economies in early 2020.

“The divergences in global monetary policy are set for a sharper turn heading into the new year, especially after the PBOC’s announcement that it will remain ‘proactive’ in its use of monetary policy tools,” Mizuho Bank said in a commentary.

“With Omicron cases rising across China, pushing regions into lock downs and tighter social restrictions, a case for additional growth support is increasingly clearer,” it said.

Markets were meandering after a mixed day of quiet trading on Friday, when many markets around the world were closed or ending early in observance of Christmas.

Last week, the S&P 500 set another record as fears ebbed about the potential impact of omicron outbreaks. However, much is still uncertain about the variant, which is spreading extremely quickly, leading to a return to pandemic restrictions in some places.

Hundreds of flights were canceled in the U.S. over the holiday weekend, with airlines reporting COVID-19 related staffing problems. France reported more than 100,000 new cases in a daily record.

Authorities in many countries have doubled down on vaccination efforts as omicron outbreaks complicate efforts to stave off fresh lockdowns while hospitals are still under strain from delta variant infections.

In energy markets Monday, U.S. benchmark crude oil gave up 84 cents to $72.95 per barrel in electronic trading on the New York Mercantile Exchange. The price of Brent crude oil fell 3 cents to $75.76.