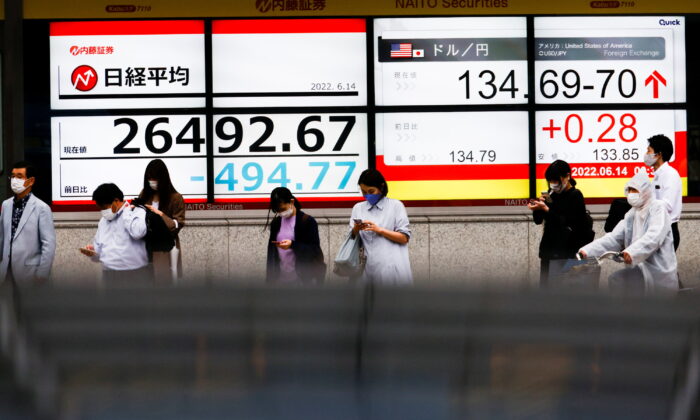 Passersby are seen in front of a screen displaying the Japanese yen exchange rate against the U.S. dollar and Nikkei share average in Tokyo, Japan, on June 14, 2022. (Issei Kato/Reuters)
Stocks

LONDON—Global stocks edged up on Friday, eyeing a sixth day of gains, while weak eurozone business activity data hit the euro and weighed on the bloc’s debt.

The MSCI World index, its broadest gauge of equity markets, was last up 0.1 percent in early European trade, with the Euro STOXX 50 index up 0.2 percent.

Overnight, the MSCI’s broadest index of Asia-Pacific shares outside Japan rose 0.1 percent, on course for its biggest weekly gain in about two months.

U.S. stock futures pointed to a lower open after weak overnight earnings from tech company Snap Inc. sounded the alarm among investors ahead of earnings from Twitter Inc. later on Friday.

S&P 500 futures were last down about 0.3 percent, with Nasdaq futures down 0.5 percent.

Despite Russian gas flowing back to Europe, for now, and some strong earning reports in the region, political tension in Italy tempered sentiment as did the outlook for further central bank action on both sides of the Atlantic amid rising inflation.

The European Central Bank raised interest rates by a bigger-than-expected 50 basis points to zero percent on Thursday, its first hike in 11 years, and ended a policy of negative interest rates that had been in place since 2014.

“The larger-than expected 50-basis-point hike was positively received by markets, but we retain a cautious view on European stocks as the ECB treads a fine line between fighting inflation and avoiding recession.”

After initially gaining, the euro pulled back against the dollar and fell further on Friday as traders weighed the likely rates trajectory. It extended losses after weak business activity data hit traders’ screens.

The euro was last down 0.7 percent against the dollar at $1.0158 but remains up about 0.6 percent on the week, on course for its biggest gain in two months.

German 10-year debt yields also took a hit on the weak Purchasing Managers Index data, and were last at 1.06 percent.

“July’s flash PMIs suggest that the euro-zone is teetering on the brink of recession due to slumping demand and rising costs. At the same time, inflationary pressures remain intense,” said Andrew Kenningham, Chief Europe Economist at Capital Economics.

Elsewhere in foreign exchange markets, the dollar was up 0.5 percent against a basket of major peers, buoyed by the euro weakness, but remained on course for its biggest weekly fall since late May as recent weak economic data tempered bets for the size of an expected Federal Reserve interest rate rise.

The U.S. Federal Reserve meets to set interest rates next week and expectations of a 100 basis point (bps) hike have faded in favor of pricing for a 75 bps move.

Leading cryptocurrency Bitcoin was last up 1.5 percent to $23,457 and was on course for its best week since last October.