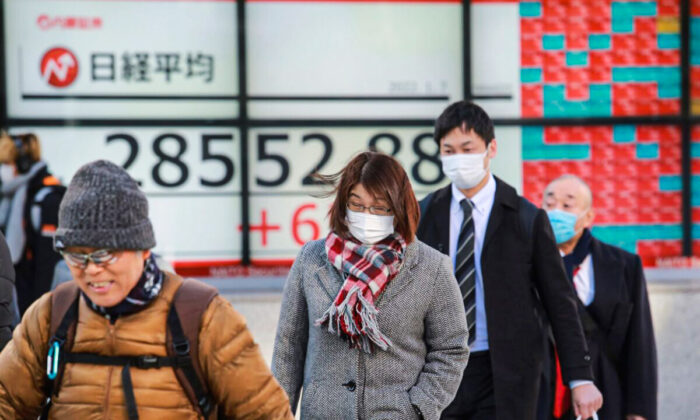 People walk by an electronic stock board of a securities firm in Tokyo, on Jan. 7, 2022. (Koji Sasahara/AP Photo)
Stocks

A resurgence of coronavirus outbreaks has added to uncertainties over a revival of tourism and other business activity in many parts of the world including Asia.

The World Health Organization says a record 9.5 million COVID-19 cases were tallied over the last week as the omicron variant of the coronavirus swept the planet, a 71 percent increase from the previous 7-day period that the U.N. health agency likened to a “tsunami.”

Japan approved new restrictions on Friday to curb a sharp rise in coronavirus cases in the three most affected southwestern regions of Okinawa, Yamaguchi, and Hiroshima.

Asia has seen smaller numbers but infections are rising rapidly and bottlenecks in testing mean that still more cases are likely unreported. At the same time, alarm has been kept in check by signs the omicron variant may cause less severe illness.

Weakness in big tech companies like Apple was the main culprit.

Bonds continued to climb. The yield on the 10-year Treasury rose to 1.73 percent, the highest level since March. It was 1.70 percent late Wednesday.

The selling followed a broad slide for the markets on Wednesday, when the Federal Reserve indicated it was ready to raise interest rates to fight off inflation.

The Labor Department reported that the number of Americans applying for unemployment benefits rose last week but remained at historically low levels, suggesting that the job market remains strong.

Much attention will be focused on the Labor Department’s monthly jobs report, due out on Friday. A strong jobs report could add urgency to the Federal Reserve’s efforts to tackle inflation by raising interest rates.

In other trading Friday, U.S. benchmark crude oil added 54 cents to $80.00 per barrel in electronic trading on the New York Mercantile Exchange. It jumped 2.1 percent on Thursday, helping to push energy stocks higher.

Brent crude, the basis for pricing international oil, climbed 54 cents to $82.53 per barrel.