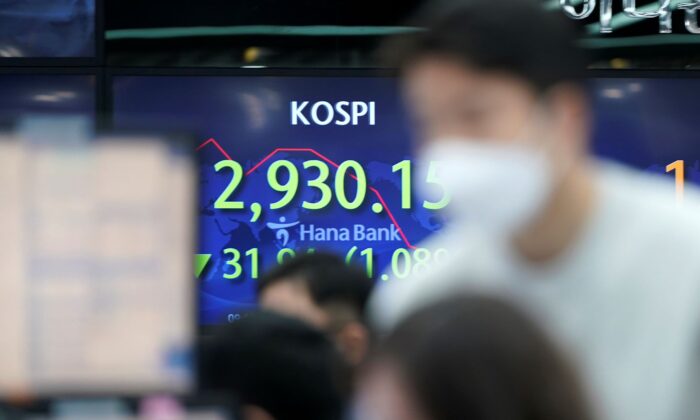 BANGKOK—Shares slipped in Europe and Asia on Friday after a retreat on Wall Street that left the Nasdaq composite down 2.5 percent.

China reported its global trade surplus surged nearly 30 percent in 2021 to $676.4 billion. The trade surplus in December swelled 20.8 percent over a year earlier to a monthly record of $94.4 billion, customs data showed Friday.

Exports rose to $3.3 trillion in 2021 despite shortages of processor chips for smartphones and other products as global demand rebounded from the pandemic. Manufacturers also were hampered by power rationing imposed in some areas.

South Korea’s central bank raised its key interest rate to 1.25 percent from 1 percent, acting to counter inflation. But while it is dialing back monetary stimulus, having raised the benchmark rate twice so far, the government announced 14 trillion won ($11 billion) in extra spending Friday, mainly to help small businesses recovering from the impact of waves of coronavirus outbreaks.

Inflation surged to 3.7 percent in December, and the latest rate hike “gives a strong signal that the Bank is prioritizing clamping down on inflation and financial imbalances,” Alex Holmes of Capital Economics said in a report. “It’s pretty clear that more hikes are imminent,” he said.

Technology companies led a sell-off on Wall Street Thursday that pulled the major indexes into the red for the week.

The selling came as investors gauged company earnings reports and new data pointing to rising prices at the wholesale level. The Labor Department on Thursday reported that its producer price index, which measures prices at the wholesale level, surged by a record 9.7 percent for all of 2021. The increase set an annual record and provides further evidence that inflation is still present at all levels of the U.S. economy.

Inflation has been a key focus for investors as they try to gauge how rising prices will impact businesses, consumers, and the Federal Reserve’s policy on interest rates in 2022.

U.S. benchmark crude oil bounced back, gaining 50 cents to $82.62 per barrel in electronic trading on the New York Mercantile Exchange. It lost 52 cents to $82.12 on Thursday.

Brent crude, the basis for pricing international oil, picked up 77 cents to $85.24 per barrel.