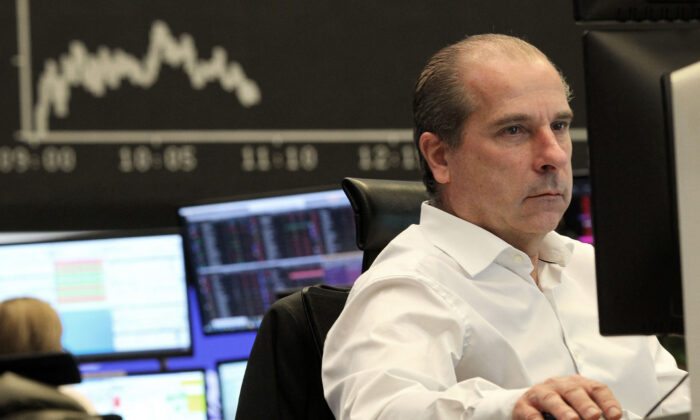 A trader works in front of a board displaying Germany's share index DAX at the stock exchange in Frankfurt am Main, western Germany, on Feb. 24, 2022. (Daniel Roland/AFP via Getty Images)
Markets

Shares opened lower in Europe after a day of declines for most Asian markets, as investors braced for another interest rate hike this week by the U.S. Federal Reserve.

Britain was observing a day of mourning for Queen Elizabeth II. Japan’s markets were closed for a holiday.

Markets have been on edge because of stubbornly high inflation and the increases in interest rates being used to fight it. The fear is that the Fed and other central banks might overshoot their policy targets, triggering a recession.

Most economists forecast that the Fed will jack up its primary lending rate another three-quarters of a point when the central bank’s leaders meet this week.

“Fact is, hawkish expectations built on the ‘hot under the hood’ U.S. inflation print means that markets have good reason to be braced for headwinds amid prospects of higher (for longer) rates; and arguably ‘higher for longer’ USD (dollar) as well,” Vishnu Varathan of Mizuho Bank said in a commentary.

Japan’s central bank meets Wednesday and Thursday amid rising pressure to counter a sharp decline in the yen’s value against the dollar. That has raised costs for businesses and consumers, who must pay more for imports of oil, gas and other necessities.

However the Bank of Japan has held firm so far in maintaining an ultralow benchmark rate of minus 0.1 percent in hopes of stimulating investment and spending.

In other trading Monday, U.S. benchmark crude lost $2.01 to $83.10 per barrel in electronic trading on the New York Mercantile Exchange. It edged up 1 cent to $85.11 per barrel on Friday.