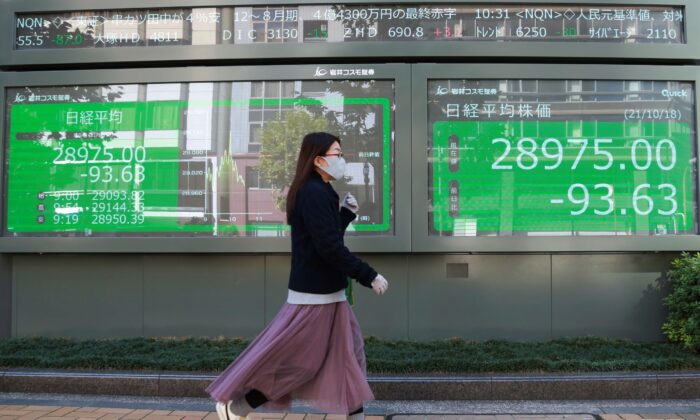 A woman walks by an electronic stock board of a securities firm in Tokyo, Japan on Oct. 18, 2021. (Koji Sasahara/AP Photo)
Markets

World shares were mostly lower on Monday after China reported its economy grew at a meager 4.9 percent annual pace in July-September.

Chinese growth is under pressure as the government seeks to limit energy use and reduce financial risks from reliance on debt-fueled property developments. Shortages of computer chips and other components due to the pandemic are hurting manufacturing.

The 4.9 percent annual pace of growth was slightly below forecasts and compared with a 7.9 percent expansion in the April-June quarter, which was exaggerated by the downturn in 2020.

“The growth outlook has weakened due to the various headwinds,” Tommy Wu and Louis Kuijs of Oxford Economics said in a report. They forecast that growth would “slow significantly” in the current quarter.

New Zealand’s benchmark edged 0.1 percent lower after figures showed prices jumped 4.9 percent in July-September from a year earlier. It was the fastest pace of inflation since early 2011.

The figures add to pressure on New Zealand’s central bank to keep hiking rates after it raised the benchmark rate earlier this month for the first time in seven years by a quarter point to 0.5 percent.

Investors remain uneasy that price increases in many countries could lead to “stagflation,” or a stagnating economy coupled with high inflation.

On Friday, Wall Street added to its recent gains, with the benchmark S&P 500 posting its best week since July.

Positive company earnings dovetailed with a report showing people spent much more at U.S. retailers in September than analysts had expected.

The S&P 500 is back within 1.5 percent of its all-time high after a shaky few weeks as worries about stubbornly high inflation, reduced support for markets from the Federal Reserve and a slowing economy knocked stock prices around.

Early indicators from earnings reports have been encouraging, with companies showing stronger profits than expected. That’s crucial after climbing interest rates raised worries that stock prices had grown too expensive relative to profits.

Treasury yields rose following the much stronger-than-expected report on retail sales. The yield on the 10-year note climbed to 1.60 percent early Monday from 1.57 percent late Friday.

The price of benchmark U.S. oil rose 90 cents to $83.18 per barrel in electronic trading on the New York Mercantile Exchange. It surged 1.2 percent to $82.28 per barrel on Friday, continuing a powerful run that has sent it up more than 70 percent this year and fanned worries about high inflation.

Brent, the global benchmark for crude, climbed advanced 59 cents to $85.45 per barrel. It jumped 1 percent on Friday, though the price of U.S. natural gas fell 4.9 percent.