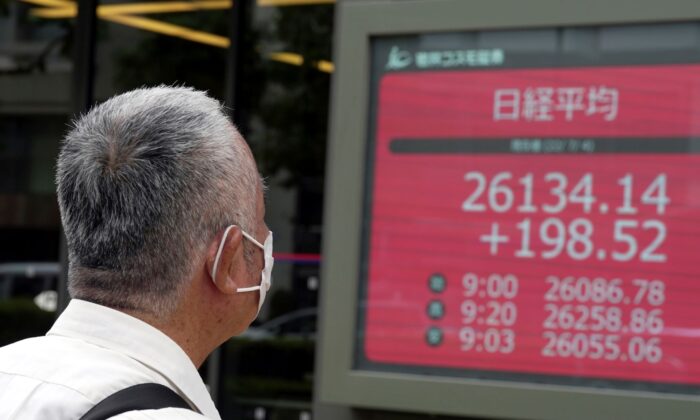 World Shares Mostly Higher Ahead of July 4 Holiday in US

BANGKOK—World shares are mostly higher while U.S. futures fell ahead of the July 4 holiday in the U.S. Benchmarks rose in London, Paris, Frankfurt, and Tokyo but fell in Hong Kong and Seoul.

Last week was the fourth losing week in the last five for Wall Street as investors fret over high inflation and the possibility that higher interest rates could bring on a recession.

The most optimistic scenario, a “Goldilocks outcome,” would bring a slowdown significant enough to cool inflation running at its highest level in four decades but not so strong as to result in a “hard landing,” Mizuho Bank said in a commentary.

“This is a tall order that is far from guaranteed at this point,” it said, noting that markets will be looking to comments in minutes from the last Federal Reserve policy meeting, expected Wednesday.

Economic data over the last few weeks has shown that inflation remains hot and the economy is slowing. The latter has raised hopes on Wall Street that the Fed will eventually ease off its push to raise rates, which have been weighing on stocks, especially pricier sectors like technology.

Analysts don’t expect much of a rally for stocks until there are solid signs that inflation is cooling, and the latest data has yet to show that. Friday brought a report that Inflation in countries using the euro had set another eye-watering record, pushed higher by a huge increase in energy costs fueled partly by Russia’s war in Ukraine.

Annual inflation in the eurozone’s 19 countries hit 8.6 percent in June, surging past the 8.1 percent recorded in May, according to the latest numbers published Friday by the European Union statistics agency, Eurostat. Inflation is at its highest level since recordkeeping for the euro began in 1997.

Shares in Japanese telecoms carrier KDDI Corp. lost 1.7 percent. They fell as much as 4 percent earlier Monday as the company grappled with outages that began early Saturday, affecting services to nearly 40 million people.

The company said Monday that most data-transmission services had been restored, but phone calls were still affected by the problems which KDDI said were technical issues with switching systems.

On Friday, the S&P 500 rose 1.1 percent, recovering from early losses to close at 3,825.33. The gain snapped a four-day losing streak for the benchmark index, which still posted its fourth losing week in the last five.

The S&P 500 closed out its worst quarter since the onset of the pandemic in early 2020. Its performance in the first half of 2022 was the worst since the first six months of 1970. It has been in a bear market since last month, meaning an extended decline of 20 percent or more from its most recent peak.

The yield on the 10-year Treasury, which helps set mortgage rates, was steady at 2.89 percent after falling Friday from Thursday’s 2.97 percent.

Financial markets in the U.S. will be closed on Monday for Independence Day.

Wall Street remains concerned about the risk of a recession as economic growth slows and the Federal Reserve aggressively hikes interest rates. The Fed is raising rates to purposefully slow economic growth to help cool inflation, but could potentially go too far and bring on a recession.

Brent crude, the pricing basis for international trading, shed 52 cents to $111.11 per barrel.