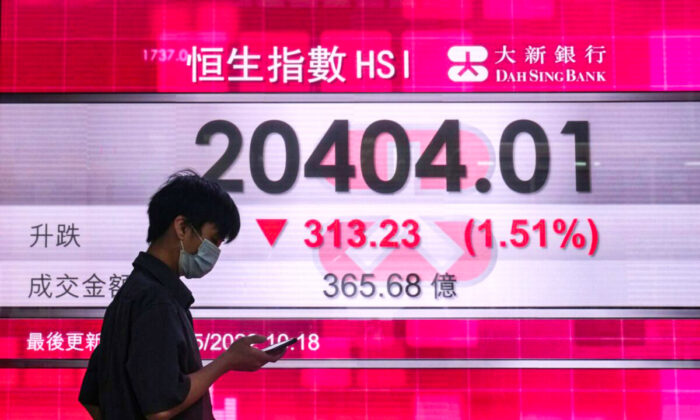 A man wearing a face mask walks past a bank's electronic board showing the Hong Kong share index in Hong Kong, on May 23, 2022. (Kin Cheung/AP Photo)
Stocks

World shares were mixed in cautious trading Monday after Wall Street dipped once again to the edge of a bear market.

Benchmarks rose in Frankfurt, London, and Tokyo and fell in Paris and Hong Kong. U.S. futures and oil prices rose.

Investors were awaiting minutes from the latest policy setting meeting of the Federal Reserve and updates on consumer prices, due later this week.

On Friday the S&P 500 dipped more than 20 percent below its peak set early this year before buying late in the day gave it a tiny gain. It finished 18.7 percent below its record. That capped a seventh straight losing week, the longest since 2001, when the dot-com bubble was deflating.

Inflation and rising interest rates, the war in Ukraine, and China’s slowing economy are all punishing stocks and raising fears about a possible U.S. recession.

Details remained to be negotiated, making it unclear how the framework might help U.S. workers and businesses while also serving the interests of partner countries.

Australia’s S&P/ASX 200 edged 0.1 percent higher to 7,148.90 after Australia’s center-left opposition party on Saturday toppled the conservative government that had held power for almost a decade.

Anthony Albanese was sworn in as prime minister after his Labor party clinched its first electoral win since 2007. Labor has promised more financial assistance and a robust social safety net as Australia grapples with the highest inflation since 2001 and soaring housing prices.

But analysts said the policy stance of the newly elected administration was not significantly different from the incumbent government and major changes were not expected.

“Although it is possible that Labor will represent a slightly more fiscally supportive government than their predecessors, we don’t see many implications for financial markets from this election result,” ING Economics economists said in a commentary.

Many tech stocks, seen as some of the most vulnerable to rising interest rates, have already fallen much more than 20 percent this year. That includes a 37.2 percent tumble for Tesla and a 69.1 percent nosedive for Netflix.

It’s a sharp turnaround from the powerful run Wall Street enjoyed after emerging from its last bear market in early 2020, at the start of the pandemic.

With inflation at its highest level in four decades, the Fed has switched from keeping interest rates super-low to support markets and the economy and is raising rates and making other moves to tamp down inflation. The worry is it might go too far or too quickly.

Goldman Sachs economists recently put the probability of a U.S. recession in the next two years at 35 percent.

Inflation has been painfully high for months. But the market’s worries swung higher after Russia’s invasion of Ukraine sent prices spiraling further at grocery stores and gasoline pumps, because the region is a major source of energy and grains.

In other trading, U.S. benchmark crude oil added 52 cents to $110.80 per barrel in electronic trading on the New York Mercantile Exchange. It gained 39 cents to $110.28 on Friday.

Brent crude, used as the basis for pricing for international trading, advanced 65 cents to $113.20 per barrel.