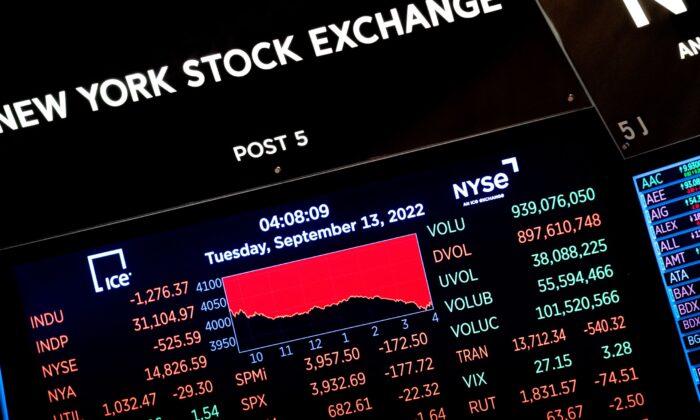 Statistics are displayed on a screen at the New York Stock Exchange on Sept. 13, 2022. (Julia Nikhinson/AP Photo)
Stocks

World markets slipped Wednesday after Wall Street fell the most since June 2020 as a report showed inflation has kept a surprisingly strong grip on the U.S. economy.

European benchmarks were marginally lower while Asia saw bigger losses. U.S. futures edged higher, with the contracts for the Dow industrials and the S&P 500 up 0.3 percent. European futures were lower.

Tuesday’s report showed U.S. inflation slowed only to 8.3 percent in August, instead of the 8.1 percent economists expected. That dashed hopes that inflation was falling back to more normal levels after peaking in June at 9.1 percent, allowing the Federal Reserve to moderate its interest rate hikes.

Now, traders are bracing for the Federal Reserve to ultimately raise interest rates more than expected to combat inflation, with all the risks for the economy that entails.

Tensions between the U.S. and China also were weighing on sentiment. Chinese leader Xi Jinping and Russian President Vladimir Putin are due to meet later in the week, underscoring the countries’ warming ties as the West pushes ahead with sanctions against Moscow for its invasion of Ukraine.

The meeting Thursday in Samarkand, Uzbekistan, on the sidelines of a summit dominated by Moscow and Beijing, reflect the strong ties between the former Communist rivals now locked in rivalry with the U.S.

On Tuesday, the Dow lost more than 1,250 points and the S&P 500 sank 4.3 percent after Tuesday’s hotter-than-expected report on inflation. The Nasdaq composite closed 5.2 percent lower.

The yield on the two-year Treasury, which tends to track expectations for Fed actions, soared to 3.74 percent from 3.57 percent late Monday. The 10-year yield, which helps dictate where mortgages and rates for other loans are heading, rose to 3.42 percent from 3.36 percent.

Traders now see a one-in-three chance the Fed may hike its benchmark rate by a full percentage point next week, quadruple the usual move.

The Fed has already raised its federal funds rate four times this year, with the last two increases by three-quarters of a percentage point. The rate is currently in a range of 2.25 percent to 2.50 percent.

Higher rates hurt the economy by making it more expensive to buy a house, a car, or anything else usually purchased on credit. Mortgage rates have already hit their highest level since 2008, creating pain for the housing industry. The hope is that the Fed can pull off the tightrope walk of slowing the economy enough to snuff out high inflation, but not so much that it creates a painful recession.

Tuesday’s data casts doubt on hopes for such a “soft landing.” Higher rates also hurt prices for stocks, bonds and other investments.

Expectations for a more aggressive Fed have also helped the dollar add to its already strong gains for this year. The dollar has been surging against other currencies in large part because the Fed has been hiking rates faster and by bigger margins than many other central banks.