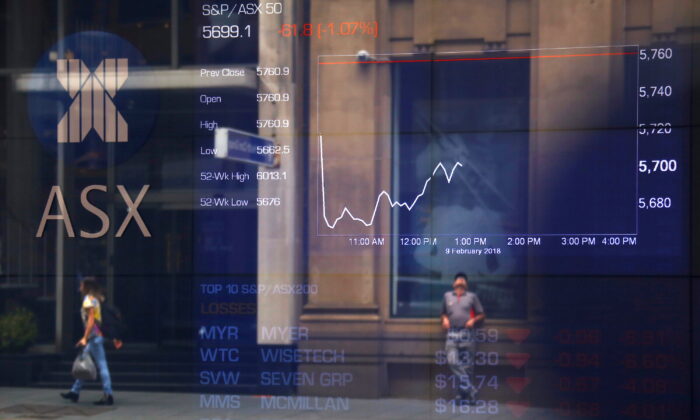 Pedestrians are reflected in a window in front of a board displaying stock prices at the Australian Securities Exchange (ASX) in Sydney, Australia, on Feb. 9, 2018. (David Gray/Reuters)
Stocks

Markets quickly moved to price a chance of about 70 percent that the U.S. Federal Reserve would raise rates by 75 basis points in September, sending two-year yields up 20 basis points on Friday and further inverting the curve.

But the broad Euro STOXX 600 gained as much as 0.8 percent in early trade, led by cyclical and growth stocks, helping recover losses from Friday sparked by the U.S. jobs report. Miners and technology, hit hard in the previous week, led to early gains. The MSCI world equity index, which tracks shares in 47 countries, added 0.2 percent, recovering losses of the same amount seen on Friday.

S&P 500 futures and Nasdaq futures were up 0.3 percent and 0.4 percent, respectively. The S&P 500 had ended lower on Friday, weighed down by tech stocks.

“Sectors like the higher rated tech stocks are still going to come under pressure for a while until we can see the Fed funds rate coming down,” said Robert Alster, chief investment officer at Close Brothers Asset Management.

The jobs data raised the stakes for the July U.S. consumer prices report due on Wednesday, which could see a slight pullback in headline growth, but likely a further acceleration in core inflation.

The risk of recession had earlier haunted equity markets, with MSCI’s broadest index of Asia-Pacific shares outside Japan dipping 0.5 percent.

Two-year Treasury yields were up at 3.19 percent, some 40 basis points above 10-year yields.

Bonds also got a safe-haven bid due to unease over Beijing’s sabre rattling against Taiwan as China conducts four days of military exercises around the island.

The U.S. dollar fell 0.3 percent versus a basket of currencies to 106.32, giving up some gains after strengthening on the jobs boom and the jump in yields.

It was flat against the Japanese yen at 135.07, after jumping 1.6 percent on Friday.

“This key data point is a million miles from a current recession, both on a change of employment, and a levels of unemployment basis,” said Alan Ruskin, global head of G10 FX strategy at Deutsche Bank, referring to the U.S. jobs statistics.

“Data like this will further any thoughts about ‘U.S. exceptionalism’ and is very positive for the USD against all currencies.”

The currency was not helped by news that Moody’s had cut Italy’s outlook to negative as Prime Minister Mario Draghi’s resignation shook the country’s political landscape.

Oil prices recouped early losses to eke out some gains, having suffered the worst week since April on worries about stalling global demand as central banks keep tightening.

By Tom Wilson and Wayne Cole