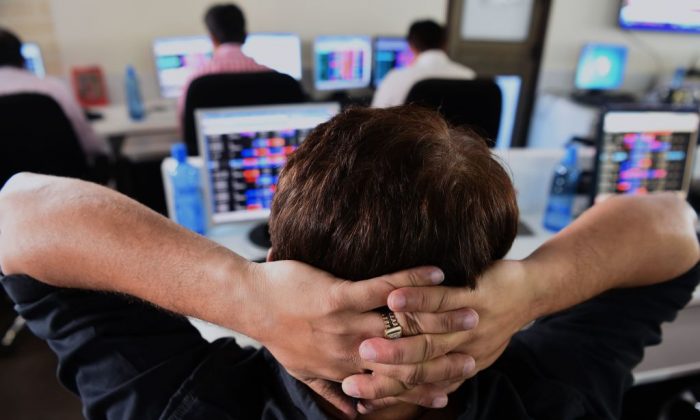 LONDON—World shares staggered higher on Monday after suffering their worst week in two years, attempting to brush off fresh rises in global bond yields while equity futures pointed to a firmer Wall Street session ahead.

Wall Street’s equity volatility gauge, the VIX – the spike in which had kicked off the ructions – was at 25.5 percent shortly after opening, versus Friday’s 29 percent close.

However, that is well above its long-term average around 11 percent, showing the jitters are not completely extinguished.

“People are nervous after the shock of the past week but it doesn’t feel like there is a crisis around the corner. But never say never,” said Grant Lewis, head of research at Daiwa Capital Markets in London.

Given solid world economic growth, Lewis said the falls were more likely a wobble than a full-blown correction to the nine-year long equity bull market as bond investors priced in an improved economic outlook.

However, futures rose one percent on Monday.

While equity markets attempt to recover, the question is whether they can withstand another sharp move up in bond yields – something will be put to the test by economic data this week.

In China, banks extended a record amount of new yuan loans in January, blowing past expectations, which is likely to support growth not only in China but underpin liquidity globally.

Analysts forecast U.S. consumer price inflation, to be released on Wednesday, to have slowed to 1.9 percent in January from a year earlier, while the core measure is seen ticking down to 1.7 percent.

Given it was fears of faster inflation – and more aggressive rate rises – that triggered the global rout in the first place, an above-forecast figure could well spark a fresh selloff in stocks and bonds.

Nor have central bankers exhibited much concern over the equity rout, indicating they intend to push on with plans to tighten monetary policy this year.

On currency markets, traders had cut net short positions in the dollar last week, CFTC data showed, but speculators returned on Monday to short the dollar, pushing it 0.3 percent lower versus a basket of currencies.

Societe Generale analysts said the risk sentiment bounce was being countered by the steeper U.S. Treasury curve but the soft dollar showed the former had the upper hand at present.

The gap between short- and long-dated U.S. yields rose to the widest in more than three months – the so-called curve steepening indicating higher inflation expectations and economic activity.

“If a better risk mood just encourages 10-year Treasuries to spike up through 2.9 percent, it seems unlikely that we will see equities bounce too far and by the same token, it’s too early to sell dollars,” Societe Generale warned clients.

The euro rose around 0.3 percent, after losing 1.8 percent last week, while the yen eased off five-month highs hit last week amid the flight to safe-havens.

Sterling meanwhile inched higher, off the three-week lows hit last week but stayed fragile, given signs of a shaky economy and a rocky Brexit process.