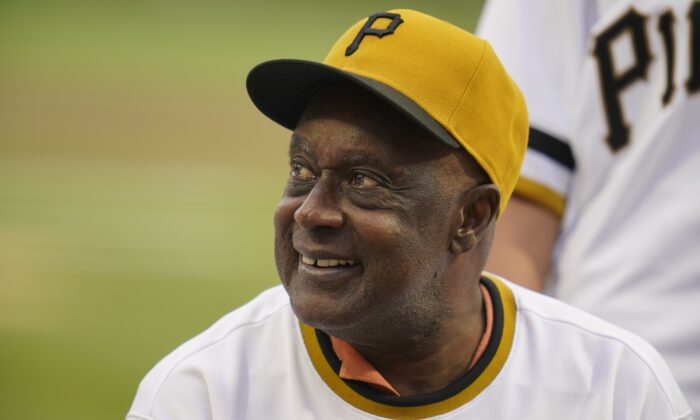 Gene Clines, a member of the 1971 World Champion Pittsburgh Pirates, takes part in a celebration of the 50th anniversary of the championship season before of a baseball game between the Pirates and the New York Mets in Pittsburgh on July 17, 2021. (Gene J. Puskar/AP Photo)
Baseball

Clines’ wife, Joanne, told the Pirates that Clines died at his home in Bradenton, Florida, site of the team’s longtime spring training home. No cause of death was given.

On Sept. 1, 1971, Clines batted second and played center field for the Pirates. He doubled, singled, and scored twice as Pittsburgh beat Philadelphia 10–7 at Three Rivers Stadium.

Clines was at PNC Park last September when the Pirates celebrated the 50th anniversary of the occasion, with fellow starters Al Oliver, Dave Cash, and Manny Sanguillen joining the festivities.

Roberto Clemente, Willie Stargell, Rennie Stennett, Jackie Hernández, and Dock Ellis also started for the Pirates on that historic night in 1971. A month later, they won the World Series, beating the Baltimore Orioles in seven games.

Clines batted .277 in 10 seasons, playing the entire decade of the 1970s with the Pirates, Chicago Cubs, New York Mets, and Texas. He hit only five home runs in 870 games, but connected in the 1971 NL Championship Series against the Giants.

“Gene was a speedy outfielder who was a key member of our 1971 World Series team,” Pirates President Travis Williams said in a statement. “He made a tremendous impact on the game, not only as a player after his career with the Pirates, but also as a longtime coach in the big leagues.”

“It was an honor to have Gene back in Pittsburgh this past September to recognize him and his teammates from our 1971 World Series championship team who took the field as part of Major League Baseball’s first all-minority lineup,” he said. “It was a joy to talk to him about his deep passion for baseball, his love for his teammates and his appreciation for the city of Pittsburgh.”

Clines later coached in the majors with the Cubs, Houston, Seattle, Milwaukee, and San Francisco, and worked in the Los Angeles Dodgers organization with outfield, baserunning and hitting instruction.