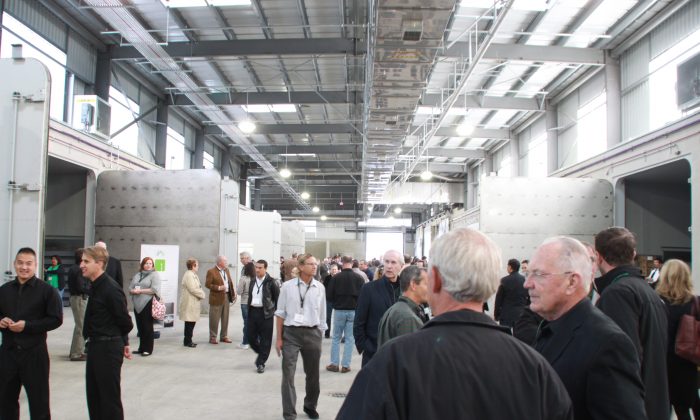 Zero Waste Energy Development Company (ZWEDC) and the city of San Jose held the opening ceremony for the new facility on Nov 22.

Organic food waste from local businesses will be sent to this facility to be composted in an anaerobic environment—broken down by bacteria without oxygen. Methane generated by the process will be used to power the facility, as well as part of the adjacent facility of Zanker Road Resource Management, co-originator of ZWEDC, along with GreenWaste Recovery.

The facility features dry anaerobic digest type. “The significance of the dry processing is that we don’t require a significant amount of water or electricity to pre-process the material. At this facility, it doesn’t require water or energy input to get the material ready. So we can take it as it is,” said Emily Hanson, director of business development and communication at ZWEDC.

The facility will be built in three phases. The first phase, which is open today, will process up to 90,000 tons of organic waste per year. It will be processing 270,000 tons per year at full build-out.

“The 90,000 annually is approximately the same amount of waste material by the city of San Jose businesses on an annual basis,” said Hanson.

The phase-one facility will produce 1.6 megawatts of power annually, which is enough to provide context to power approximately 1,200 to 1,600 homes, Hanson said.

In addition to the electricity produced, the facility will also be producing compost products. The process will produce 32,000 tons of compost annually.

Caroll Mortensen, the director of CalRecycle, a state agency overseeing the permit of this facility, told us the significance of such a facility. “All the organic material make up more than half of what’s currently in landfill of the state. When the organic material degrades, it is one of the highest-emitting greenhouse gases, methane. Anything that can keep that material out of landfill is great.”

The facility is built on an old landfill, with a 30-year lease from the city of San Jose.

“It’s the largest of this kind of facility in California, and it took a long time to acquire a permit, but we think we paved the ways for others facilities of its kind to be placed in California,” said Jo Zientek, Deputy Director of Environmental Services Department of San Jose.

The city of San Jose worked with Zero Waste to bring the utilities such as water, electricity, and sewage system to the plant. According to Zientek, the city gave credit to Zero Waste for the $11 million it spent to bring in the utilities and close the landfill.

Phase two will bring residential food waste to the facility. During phase two, the facility also plans to add the production of compressed natural gas as a vehicle fuel. The current phase is primarily to generate electricity.

Zientek said that all the permits and planning are complete for all three phases. As long as Zero Waste has enough organic waste to supply phase two, construction can begin.

Hanson expressed the hope that Zero Waste will begin aggressively planning the phase two construction in 2014.

“The facility is on the foundational accomplishment of the Green Vision of San Jose,” Zientek said. “The city and mayor passed the Green Vision on October 2007, and 30 days after that, we were in discussion with Zero Waste Energy Development Company to build that facility.”