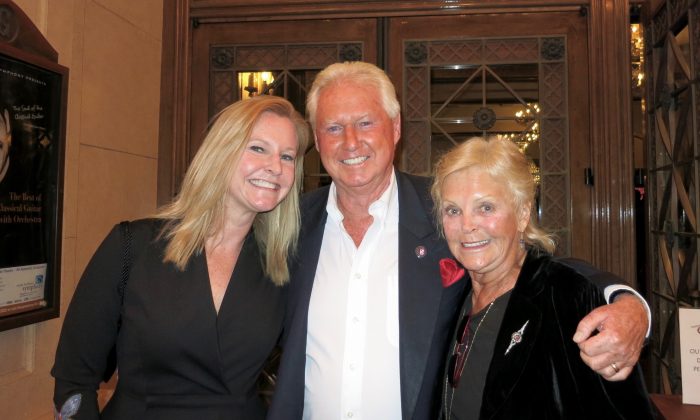 SANTA BARBARA, Calif.—On the evening of April 29, Shen Yun Performing Arts graced the stage at The Granada Theatre before an enthusiastic, receptive audience for one of its sold-out performances.

Dr. Lorne G. Everett, his wife and daughter attended the performance and were fascinated by the presentation of New York-based Shen Yun, whose mission is to restore China’s divinely-inspired, ancient culture and beliefs through story-based dance and music.

“My wife, daughter and I were thrilled with the show. The range of spectacular visual settings, dance and musical interpretations and fascinating story was captivating,” Dr. Everett wrote in an email interview after watching the performance. “This experience is highly original, visually and spiritually beautiful, takes one’s emotions in several captivating directions, and should be on everybody’s bucket list.”

Dr. Everett is a world-renowned scientist in the field of hydrology and hydrogeology. He is the President and CEO of L. Everett & Associates, an environmental consulting firm in Santa Barbara. He is also a retired professional researcher in the Bren School of Environmental Science & Management at the University of California at Santa Barbara, and former Director of the Vadose Zone Monitoring Laboratory at UCSB. Dr. Everett was the sixth Chancellor of Lakehead University in Canada.

As a renowned expert on hazardous waste and groundwater monitoring, Dr. Everett has testified before Congress on different occasions, and participates on Blue Ribbon Peer Review panels for most Department of Energy (DOE) installations. He is an expert witness in over 70 court cases involving over $2 billion dollars.

Dr. Everett has received numerous awards, published over 150 technical papers, held several patents, developed 11 national ASTM Vadose Zone monitoring standards, and published several books that are widely used in the world. For example, his best-sellers are “Vadose Zone Monitoring for Hazardous Waste Sites;” “Groundwater Monitoring,” which is endorsed by the EPA and recommended by the World Health Organization for all developing countries; and “Groundwater Resources of the World and Their Use,” which was distributed to every UNESCO Water Resource Centre in the world.

“From the opening moment of each performance, the audience is sensually pushed back into their chairs at the rare combination of art and beauty,” Dr. Everett wrote about Shen Yun.

Shen Yun’s performance includes classical, folk, and ethnic dances, accompanied by digital, interactive backdrops and a unique, live orchestra combining Chinese and Western instruments.
The dancers in each piece are adorned by attire from China’s divinely-inspired, traditional culture and is meant to create a consummate stage effect.

In addition, vocal soloists who sing in Chinese using the bel canto technique as well as an instrumental solo are interspersed throughout the performance.

Dr. Everett relished all aspects of the performance. He was particularly impressed by the originality of Shen Yun.

“Classical Chinese dance is grounded in 5,000 years of divinely inspired culture, and is a dance art form built upon a deep foundation of traditional aesthetics. Classical Chinese dance is rich with expressive power. Through expression of bearing and form, beautiful dance movements bring out the inner meaning of intrinsic thoughts and feelings, reflecting the peculiarities of human nature, the standard for human conduct, moral concepts, mental state, one’s value system, and so on,” according to the Shen Yun website.

Dr. Everett was equally impressed by the digital backdrop, with vividly animated settings, extending the stage and transporting the audience to a world where heaven and earth are one: “It was spectacular and completely original.”

He also appreciated the important role of the hosts who open the gates of understanding for the audience into each wondrous realm, story, or myth. “The introduction of each performance was critical to understanding the theme of each setting,” he said.

But he was not only delighted by Shen Yun’s beautiful visual effects; he also enjoyed the spirituality of traditional Chinese culture portrayed in the performance.

According to Dr. Everett, the Chinese history in a spiritual sense has captivated the world over, and it was a magnificent and sophisticated experience to relive these ancient values.

China has been known as the “Celestial Kingdom,” a unique land where the divine and mortals coexisted. It was believed that Chinese culture was passed down from the heavens.

Much of ancient Chinese culture was deeply influenced by Buddhism, Daoism and Confucianism, and was based on the idea of harmony between heaven, earth and humankind. New York-based Shen Yun’s artists use classical Chinese dance and music to tell a variety of stories, from the legend of the Yellow Emperor descending from heaven to reign, heroic tales in ancient times, to modern stories of courage and steadfast faith.

Dr. Everett was touched by the vignette entitled “The Steadfast Heart,” which is set in modern China and depicts a husband who was separated from his wife and persecuted for his beliefs. The man returns home physically broken, but his faith restores his health.

In summary, Dr. Everett wrote, “This was truly a rare and forever memorable experience for our family.”