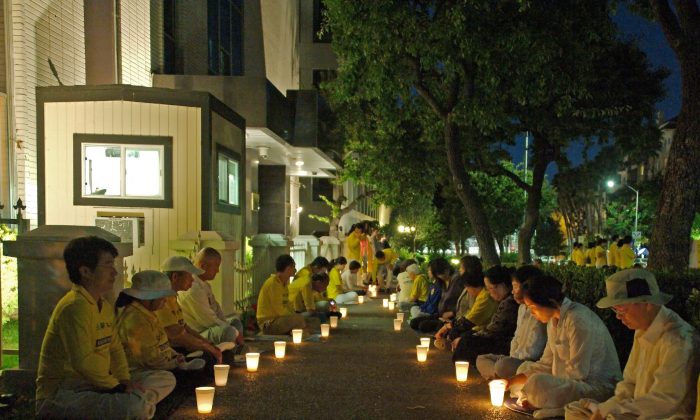 Practitioners hold candles in remembrance of the innocent Falun Dafa practitioners killed because of their faith and for their organs. (Robin Kemker/The Epoch Times)
Commemorating July 20

LOS ANGELES—Over 150 Falun Gong practitioners gathered opposite the Chinese Consulate in Los Angeles on July 20 to commemorate the persecution that began 15 years ago and demand the Chinese Communist Party (CCP) cease its atrocities against the practice.

From 1992, when Falun Gong—a spiritual discipline based on truthfulness, compassion, and tolerance—was first brought to the public, to 1999, it grew in popularity, gaining support from officials and scholars alike. Mr. Li Hongzi, the founder of the practice, had even received various awards from official agencies. However, in the background, an infiltration was ordered by Jiang Zemin, the former top leader of China. The secret agents revealed no negative aspects of the practice. In fact, they praised its effects on the health and well being of the people.

Zemin, however, was not satisfied. He ordered various professionals of different disciplines to attack the practice’s philosophy and health benefits and have those published through various public means—a strong turn from the previously supportive stance the CCP took in declaring the Falun Gong practice to be a benefit to the people before 1999.

For centuries, if local officials failed to judge a situation correctly, Chinese could appeal to the National Appeals Office, adjacent to Zhongnanhai, where the emperor once sat, and now the CCP national leaders reside. Calls by practitioners were made for support, and on April 25, 1999, some 10,000 practitioners appeared at the Appeals Office to support a dialogue between practitioners and CCP officials to peacefully vindicate false perceptions of the practice as well as a growing campaign of harassment by police around the country.

Some officials wanted to work with practitioners, but the weight of the Party was directed by Zemin to begin an all-out persecution, which commenced July 20.

Wu Xuegang was at Zhongnanhai during the incident. He believed that the appeal was a milestone for Falun Gong, after which it became known internationally. He was still moved by how peaceful and compassionate practitioners were at the time. He expressed his hope that the persecution would end soon.

Dr. Dana Churchill, a member of Doctors Against Forced Organ Harvesting (DAFOH), discussed progress on various fronts around the world to stop what he called an “unbelievable crime against humanity”—forced organ harvesting from living Falun Gong practitioners in China.

In 2013, Doctors Against Forced Organ Harvesting (DAFOH) initiated a petition to the United Nations High Commissioner for Human Rights calling for immediate action to end the unethical practice of forced organ harvesting from prisoners of conscience in China. The petition also calls for an end of the persecution of Falun Gong, the primary victim of the forced organ harvesting.

Between July and November 2013, nearly 1.5 million people in over 50 countries and regions signed the petition and expressed their support to call for an end to this unprecedented evil. On December 12, 2013, the European Parliament adopted an urgent resolution on organ harvesting in China.
“The world demands that the CCP stop these atrocities against innocent Falun Gong practitioners,” Churchill said with great emphasis.

Also represented at the rally was the Quit the Chinese Communist Party campaign, an effort to help Chinese people in China and around the world to renounce their memberships with the CCP. Helen Le, a local coordinator with the group, said, “Since the effort to quit the Party began in November 2004, 171,821,987 have severed their affiliation with the CCP and its associated organizations, which represents a monthly average of 1,468,000 people.”

Ms. Lee, a representative from Center for Quitting the CCP in Los Angeles, said, “Amidst the corrupt officials, immoral society, and the polluted environment, Chinese people are realizing the evil nature of CCP.”

It is generally understood by the Chinese people that the CCP is corrupt and demonic in nature. However, because of decades of terror, no one will ever bring up the subject for fear of being overheard and reported.

Few people understand Falun Gong practitioners’ passion to have Chinese people throughout the world “Quit the CCP” anonymously or with their true name on places such as street corners, at popular resorts, and tourist venues. It is to erase the effect of CCP on them. Many feel the change immediately.